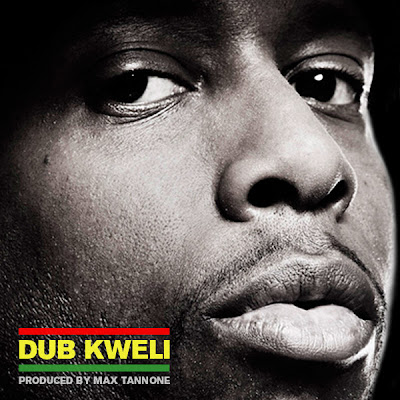 I just returned from the long Labor Day weekend here in the U.S. to find an e-mail from reggae/hip hop remixer Max Tannone (who I interviewed earlier this year) in my inbox. He's just released a new project along the same lines as the kicking Mos Dub project he released earlier this year. This one's called Dub Kweli and Tannone has taken the same concept he employed so successfully with Mos Def, and one again matched the acapella vocals of hip-hop artist Talib Kweli to classic dub and roots reggae classics from the 60's and 70's.
Tannone has a good feel for reggae and has fused Kweli’s rhythmic delivery of intelligent, insightful and political lyrics with the old school Jamaican reggae and dub to create 21st century protest songs that keep you dancing and nodding your head. Some may be familiar with Tannone's earlier projects, including 'Jaydiohead', which combined Jay-Z's vocal vocal tracks over Radiohead songs or 'Doublecheck You Head' which mixed Beastie Boys vocals over instrumental tracks the band recorded for the 'Check Your Head' disc. While I have enjoyed both of those recordings very much, the 'Mos Dub' and 'Dub Kweli' recordings are on another level. Perhaps its because I'm a old school reggae fan at heart or because I'm a frustrated remix artist myself. Either way, I find myself drawn back to the songs Tannone has created. Oh, and did I mention this one is also free?
You can stream the album for free on Soundcloud (below) or grab a zip of the entire album here.