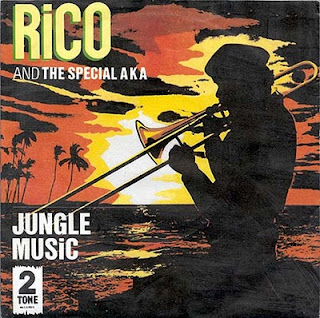 The story behind the recording of 'Jungle Music' by Rico & The Special A.K.A. is yet another fascinating reminder of the way that reggae songs are written, morph and are re-invented again by new artists for new audiences. Who would have guessed that a song that is so identified with 2-Tone and members of The Specials was originally written by Stevie Wonder and also later covered by a member of Musical Youth!

The song (originally known as 'What You Talkin' Bout (You Don't Like The Reggae Beat)' had its genesis in an onstage jam session that Stevie Wonder did with a hotel house band in Jamaica that featured Glenroy Washington, a journeyman reggae musician who played and performed with a who's who of 70's and 80's reggae producers and bands.  Washington provided the backstory on the song in a online interview:


"I was living in Ocho Rios, Jamaica. We were the resident band at the hotel, The Americana. It's now called the Sheraton. So, while we were there, one day we met these two sisters, the Andrews sisters. Stephanie and Bonnie Andrews from California. We were talking, having a conversation, and one of the ladies says she works for Stevie Wonder. She is his coordinator. In my mind I was saying "yeah, right." But, she said Stevie is coming to spend a vacation there, and she came down to scout out the area, to make sure and do different things. We didn't believe her at all, but one Saturday night we were on stage and playing with this guy, doing his show, and in walks this woman with Stevie Wonder. And the whole place was in an uproar. He already reserved front row seats, right in front. So he came down and sat right in front of the stage. After everybody settled down, we were doing our show, and he wanted to talk to us after. Because he was sitting there rocking, and he say he like the way the band sounds. So for about two weeks, every night he would come on stage and jam with us. The place would be packed. He get on stage .... one night he played drums, most night he played keyboards. That was fun. He came and jammed with us. He wrote a couple of songs for me. There was a song called 'Jah Business,' and 'Jah Coming.' And then there was another song that we made up right on stage, 'What You Talking About,' that musically we did a cover of it .... (sings): "What you talking about, say you don't like the reggae beat, you must be craaaaazy." We did it on the 'Tempted to Touch' rhythm, but 'Tempted to Touch' wasn't even around yet."

Washington would later move to the U.S. to work with Wonder and this version of the song was later covered and released by Dennis Seaton of Musical Youth in a failed attempt at a solo career in 1984 following the break-up of Musical Youth.  Check out the video below (which prominently features Wonder) and you will note that while the Wonder and Rico songs share a chorus that is where they similarities end!

It turns out that Rico heard the Stevie Wonder version performed at the Reggae Sunsplash festival in Jamaica.  He liked the tune so much that he wrote and performed a variation of it with members of The Specials (Jerry Dammers, John Bradbury, Horace Panter and Dick Cuthell) who backed him on a short German tour.  The song proved to be a crowd pleaser and the band returned to Coventry to record the song.  It turned out to be one of the last singles ever released on the 2-Tone label in February 1982. 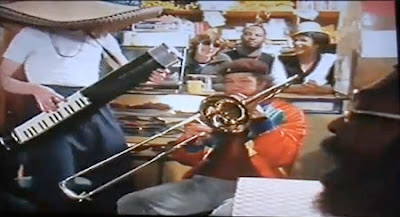 Nearly 30 years later the song, a delightful reggae-cum-ska track with hints of African hi-life remains a pure pleasure and would form the musical blueprint for Dammers and Cuthell who just two years later would write and record their most famous piece of music -- 'Nelson Mandela'.  The best part of the song is the perfect symmetry of Rico singing and playing trombone!  George Marshall author of 'The Two Tone Story' put's the song in the pantheon of 2-Tone classics:


"Jungle Music could have come straight out of Walt Disney's Jungle Book let alone Walt Jabsco's stable (a compliment from a big fan of the film's music), and was Rico's most commercial released to date. He even put his trombone down often enough to supply the vocals. ... Of all the 2Tone records not making the charts, the colourful Jungle Music has the right to feel most hard done by. Still, the public's loss was the true fan's gain."

I recently discovered the very rare Barney Bubbles’ video promo for the song. According to Paul Gorman who is author of the book 'Reasons To Be Cheerful' about Bubbles, the video was a sunny contrast to the doom laden 'Ghost Town' video which Bubbles also directed:


"The Jungle Music film serves as a carnivalesque counterpoint to the appropriately dour Ghost Town, evoking in part the innocence of Technicolor 50s coffee bar newsreels. As in Ghost Town, the musicians (including Dammers in his bluebeat hat-defying giant sombrero) travel in a classic car, but this time arrive to celebrate multi-cultural Britain, not mourn its inner-city decay."

Here is all its glory is the rarely seen video for 'Jungle Music' as directed by Barney Bubbles.  Enjoy!

I've always loved this tune. Thanks for the history behind it and digging up this AWESOME music video I never knew existed!

Another excellent read, Marco, when'll your book be ready? ;)
I actually do remember this song from my childhood days, probably in the Dennis version though

Thanks for the kind words! I've always loved this song. In fact my band Bigger Thomas often performs it live.

A book could be on the horizon...

Nice! Never have seen this video--and love that Barney Bubbles directed it (as well as Ghost Town).

very good read - I really like the upbeat mandela and this one as well.

Are their any other versions of Rico doing this song? I seem to remember a different version of this one.

Thanks for any info