I've been thinking alot about the early days of Bigger Thomas (when the band was also called Panic!) and the club that helped put us on the map in late 80's and early 90's. City Gardens was a mecca for disaffected, suburban kids in NJ who were outside the mainstream and were looking for more out of the music that was being force fed on the radio (Springsteen and 80's pop crap).

I remember the first show I ever saw at the club (The Groceries, a local NJ band with a good following) when I was a college freshman at Rutgers. The club was in run down part of Trenton and it was a dark and dingy place but I was always excited to go there. The car rides with my friends to and from the club were always memorable and the characters who ran the club (one Randy Now) seemed larger than life to me as a 18 year old. Its fair to say that my experiences seeing a variety of diverse shows at City Gardens molded me into the music fan I am today.

As a young ska aficionados in the early to mid 1980's, the best part of City Gardens was the number of ska shows that Randy booked. He was clearly a fan of the genre and he went out of his way to bring in local and regional bands from NYC and Philly. It was always easier to wait and see these bands when they came to Trenton then to trek into CBGB's or The Ritz and it made me love the club even more that they came to us in NJ.

My love and passion for ska led me to start a band in New Brunswick while I was a student at Rutgers University. In fact, it was a chance meeting that Roger and I had with Steve Meicke (original and current band sax player) at a Ranking Roger show at City Gardens in August 1988 that took the band (then known as Panic!) from the planning stages to gig ready.

I don't remember the sequence of events anymore, but somehow Randy Now heard about our little ska band making some noise in New Brunswick and New York in the fall of 1988 and spring of 1989 and he offered us a show opening for Boston's Bim Skala Bim in March 1989. We must have made an impression because he kept on booking us for the next 2 1/2 years until the original band split after a bittersweet gig opening for our musical heroes The Special Beat in September 1991.

Its safe to say that Randy Now played a huge role in helping Panic!/Bigger Thomas become the band we are nearly 20 years later. He acted as an unofficial booking manager, connection maker and guru to us. The sheer variety of shows we played opening for bands as diverse as De La Soul, Burning Spear and Token Entry ensured we were seen and heard by many. In fact, people still come up and say to us that they remember seeing us at City Gardens back in the day.

To honor Randy and City Gardens I have posted all the punk cards of shows we played. These cards which Randy made by hand (long before home computers and graphics programs) used to arrive in the mail every month or so promoting shows at the club. I loved getting them and planned many weekend s based on shows I wanted to see. I am amazed at the variety and diversity of bands Randy booked at the club. Looking back its a who's who of punk and underground rock hall of fame bands like Nirvana, Green Day, The Ramones, DEVO etc. I'm proud and more than awed by the company of bands we shared the stage with all these years later.

If you want to see some real rock and roll history be sure to visit Randy's web site where all the punk cards are on display: http://www.randynow.com/punkcards.html 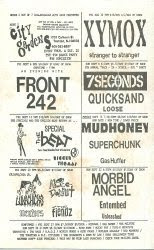 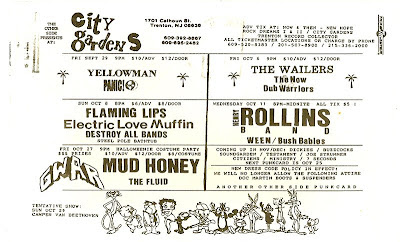 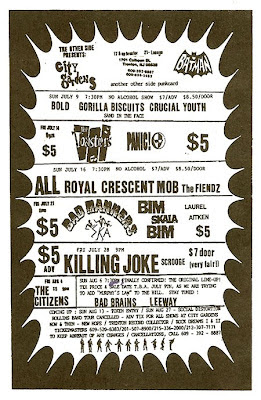 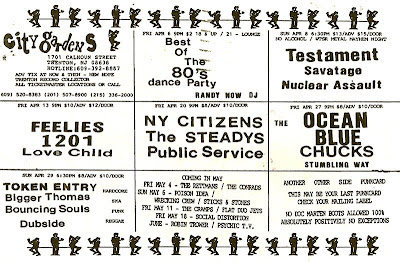