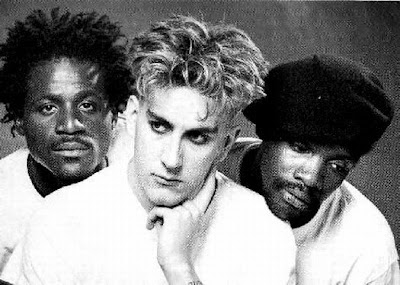 If there was another band I really wanted to be in it was the Fun Boy Three. I was initially shattered when The Specials broke-up (but recently heartened to hear they have reformed with the intention of playing live later this year). When I heard the first FB3 album "Fame" I was confused and I hated it. Over time it grew on me as I got older and when their second and final album "Waiting" was released I was a huge fan. Produced by David Byrne of Talking Heads it was an amazing mix of pop, reggae, avant-rock and just a hint of all round weirdness. I never saw FB3 live and until recently was content to listen to their first two albums and watch videos on You Tube. Imagine my glee at discovering two gems. First, a recording of a live concert on the UK music TV show Old Grey Whistle Test from 1983.

Incredible live set from former Specials members, Terry Hall, Lynval Golding and Neville Staples. Recorded in 1983 for the Old Grey Whistle Test program, this album catches Fun Boy Three at the top of their game. Unforgettable versions of Fun Boy Three classics, such as Our Lips Are Sealed, We're Having All The Fun, Summertime and a cover the Specials classic, Gangsters!

Track Listing:
Stone Fox Chase (Theme) Area Code 615
The More I See (The Less I Believe)
The Pressure Of Life
Going Home
Things We Do
Summertime
Alibi
Our Lips Are Sealed
Tunnel Of Love
We're Having All The Fun
Gangsters
T'aint What You Do (It's The Way That You Do It)
Well Fancy That [Kid Jensen Radio 1 Show]
Tunnel Of Love [Kid Jensen Radio 1 Show]

Even better was a discovery of a live video of Our Lips Are Sealed on You Tube which I have also posted for all you other FB3 fans. I remember hearing that Terry, Neville and Lynval were backed by a band of all women but it was great to finally see them.

I'm from Leeds UK and i remember literally being gutted for a month when The Specials split. Thing was - a year or so before, I was begging my mum to let me go see The Specials at a free Rock Against Racism rally in Leeds. The UK was a bit scarier then than now - it was pretty tribal still so she wouldn't let me go to the show (I would've been 13).

As we know now, the band hated each other's guts (according to Sir Horace Panter's recent book) so split shortly after.

Fun Boy 3 were quick to get a single out, so i just moved onto liking them, they were more 'fun' than the Special AKA who went a bit smooth for me at the time. Anyway, the first live show i ever saw ended up being these on the Fun Boy '83 tour. Leeds Uni - it was a fuckin mega night.. and the backing band were all girls, you're right.

We did that thing you do at your first gigs and ran in and clung to the front all the way through.. watched the support group (Dolly Mixture - who worked as Captain Sensible's backing band).. good memories man, cheers for the links.

ps. I'm off to your town later this month, any good tips for nights out?

Thanks very much for the great post. I wish I had been able to see FB3 when they did a quick tour of the US in 1983 but tickets were to come by and I was still in high school and a trip into New York on a school night was a tough sell to my parents.

You've picked a great time of the year to visit New York City. My best recommendation would be that you pick up a opy of Time Out New York at a newsstand when you get here. It will have great listings of all things cultural and musical and there is bound to be a band or two you would like playing somewhere in the city. Otherwise a night out in the East or West Village is always a good time with good pubs and restaurants.

Absolutely love this version of Our Lips are Sealed. Did not know there was a vid for it on youtube. Thanks for sharing.