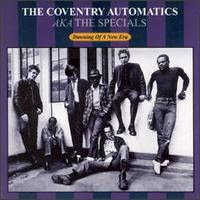 If you love The Specials then this item is essential. These 1978 recordings by The Coventry Automatics (or The Specials right before the name change) are raw, fast and exciting.


From the liner notes: "The story behind the recordings dates back to 1978 when a six piece band called The Automatics travelled to London to record a number of demo tapes with the intention of securing a record deal with a major British record label. The group, consisting of Jerry Dammers on keyboards, Lynval Golding on rhythm guitar and backing vocals, Roddy "Radiation" Byers on lead guitar, 'Sir' Horace Panter on bass, Silverton Hutchinson on drums and Terry Hall providing lead vocals, laid down a total of thirteen songs. Despite the obvious potential of the material, major companies seemed unwilling to take a chance on the group and after months without progress, the group finally decided their best and possibly only chance of success lay in releasing their material on a label of their own. Fortunately, the conditions for such a move could not have been more favourable. The wind of change blown in by punk had left the way open for new talent to emerge in its wake and by the late seventies a framework for small, independent labels to operate and achieve national distribution and air-play was firmly established in the UK."

The Coventry Automatics - Dawning Of A New Era
Posted by Marco On The Bass at 9:44 PM