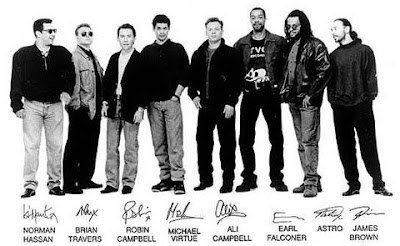 I probably should have been born in Birmingham, England instead of Philadelphia, PA. I've always been an anglophile and my inclinations and preferences really seem to be British in so many ways especially when it comes to music. In addition to being a die hard fan of The Beat I have also always loved that other Brum institution UB40. In fact I would count the first two UB40 records as classics that would make my desert island disc list. I credit the UB's with opening up the whole wide world of reggae for me as a young man. I started with them and graduated to the amazing and diverse sounds of Jamaican reggae. Its fair to say the release of Labor of Love in 1983 started me on the path of loving and listening to ska, rocksteady, roots reggae and dancehall.

I was also inspired by the UB40 story because none of them knew how to play their instruments when the started and neither did I. That didn't stop them and it has never deterred me even though I can't read or write music. I play the bass by ear and have educated myself by listening to hours and hours of music.

Formed in 1978 and named after an unemployment benefit document, UB40 have enjoyed huge success, with more than 70 million records sold worldwide and 51 hit singles including Red Red Wine and I Got You Babe with Chrissie Hynde – more than The Beatles or Rolling Stones.

Now their eagerly awaited new album, 24/7, is to be released next week.
The new release takes on added significance for UB40 fans as it will be the last album ever recorded by the band's original line-up. Ali Campbell, the band's lead singer, left earlier this year to pursue a solo career, followed by keyboard player Michael Virtue. The original line-up of boyhood friends from the inner-city areas of Birmingham, whose multi-racial line-up has always seemed like a microcosm of multi-cultural Britain, even managed to conquer the notoriously hard-to-crack American market.

They credit their longevity to the fact that there is no room for egos. Which is why the recent split with two founder members has come as such a shock. The departures have led to bitter recriminations on both sides.

Rumor has it that the remaining six members of the band have tapped Maxi Priest as the new lead singer of the band to fill in for Ali (shades of Van Halen/Van Hagar anyone?) but it remains to be confirmed. 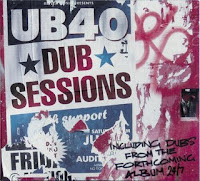 It now appears that 24/7 will be the final studio album the original UB40 ever records. While we wait for the new album fans can seek solace in the Dub Sessions album which features ten tracks in total, four of which will be dub versions from 24/7. The other six tracks on the dub album will be made up of exclusive and very cool tracks that were worked on during the recording of the 24/7 album.
UB40 - Dub Sessions
Posted by Marco On The Bass at 5:25 PM