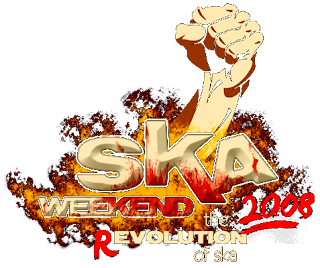 We were just invited to play at Ska Weekend 2008 on Saturday July 19th. For those not familiar with the festival, it is a music festival in Knoxville, TN that began in 2003 with only a few bands and had grown to more than 30 bands by 2007.

The festival is touted as the largest Ska festival in the country by its organizer Ben Altom. The event usually takes place during April, but has been moved to July for 2008, and draws some of the most popular ska, punk and rocksteady bands in the country (Mustard Plug, VooDoo Glow Skulls, The Slackers, Westbound Train, Hub City Stompers, King Django and The Pietasters all played the festival in 2007) it also routinely attracts more than 1,500 people. The festival was held in Knoxville's historic "Old City" but will move to the Knoxville World's Fair Park in 2008 to accommodate a larger audience and more stages.

I plan to preview the bands that have been announced (save Bigger Thomas) and will post songs, reviews and video so any one who is interested can check them out.

Here is the list of announced bands. More are expected: