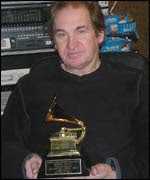 Roger Lomas, who is best known for his production work with 2 Tone bands The Selecter, Bad Manners and The Bodysnachers achieving 18 hit singles along the way, was also an extremely successful musician in his earlier years as lead guitarist of Coventry band The Sorrows, who in addition to achieving chart success in the UK & Europe were hugely popular in Italy where in the mid sixties at the tender age of 17 worked & lived in Rome performing on sell-out stadium tours & TV shows. Although officially ‘hanging-up’ his guitar in 1979 as his record production career took off he returned to the stage briefly for a four month period in 1989 to perform 60 shows & several TV appearances after joining the extremely successful 60’s band The Fortunes.