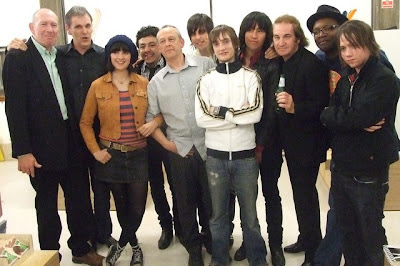 I am definitely behind the times when it comes to The Ripps. I got hyped to them by a few ska message boards I visit and when I saw this picture I knew I had to find out more (that's producer Roger Lomas (Bad Manners) along with Horace Panter and Lynval Golding of The Specials with The Ripps and The Enemy).

People on the boards were saying The Ripps were the reincarnation of The Specials and it didn't hurt that they were also from Coventry. Truth be told the sound of the first album "Long Live The Ripps" which came out last year has more in common with the Sound of '77 and the songs lift liberally from The Jam, The Buzzcocks, The Sex Pistols etc. There is a tinge of ska here and there but overall I give them the thumbs up. I'm hopeful that the new album that is coming out this summer and is being produced by Roger Lomas will be more 2Tone/ska/Clash-style reggae and if the 3 songs now up on their Myspace site (http://www.myspace.com/theripps) are any indication it will (I particularly like "The People Have Spoken and Rude Boy).

The band is 3 piece and has a woman on the drums (which is pretty rad). They also have an interesting back story. The review below from Indie London provides the lowdown on the band.

COVENTRY upstarts The Ripps boast a sound that’s fast, furious but mostly fun: it’s essentially punk power pop that’s as effusive as early Supergrass but with an outsider edge that stems from brothers Patch and Raul Lagunas’ parents, who were political activists in General Pinochet’s Chile, living in exile in the UK since the ’70s.

Their influences range from the obvious likes of The Clash, The Pixies, The Buzzcocks and Blur, to the more surprising likes of the B-52’s and The Shangri-la’s. Former single Loco is typical of what to expect; a joyfully exuberant opening salvo that taps into the “loco” nature of proceedings. It’s essentially a love song about two dysfunctional people who want to party but it’s delivered with such gusto that it’s impossible not to be swept up in its cavalier attitude.

It’s followed by the similarly brash Vandals, a rousing blend of early Blur-style guitar riffs and punchy lyrics (“we are the vandals, a generation of losers and wasters heading for trouble”). There’s elements of The Jam and The Specials too. Slightly angrier and certainly more punky is Hypocrite, while the opening riffs of Vampires appear ripped right out of Pixies’ culture.
It’s a distinct feature of the album, however, that it’s easily divided into angry punk moments and more infectious power-pop. Needless to say, it works best when occupying the latter territory.

Stranger, for instance, is a firm highlight; a track that begins with a whistle and unfolds with some catchy hooks and vocal melodies. Holiday employs some Beach Boys-style melodies before careering head-first into breezy Brit-pop territory, a la Blur. And You Don’t Even Care drops some cheeky, laddish lyrics into the mix to conjure an anthem about juvenile affection and unrequited passion. During such moments, the album positively vibrates with the energy of youth and the sound of a band finding its feet. Hell, there’s even a nod towards Kaiser Chiefs territory on final track, I Don’t Like You Any More, which employs the same sort of chant-along chorus that made Every Day I Love You Less And Less so memorable.

But in spite of its obvious comparisons, Long Live The Ripps appears happy to wear its influences on its sleeve because it also retains a confidence in its own ability to entertain. The result is mostly infectious in a loud, brash, guilty pleasure kind of way. Download picks: Loco, Stranger, Holiday, You Don’t Even Care, Benefits, Bad Influence

The Ripps - Long Live The Ripps
Posted by Marco On The Bass at 2:04 PM