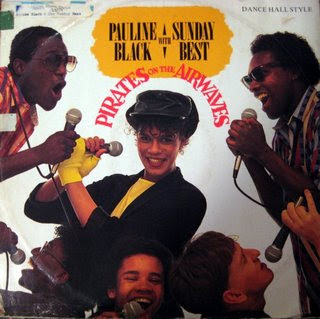 The musical blogosphere continues to amaze me. I have been looking for this very hard to find single for almost 25 years. I remember reading a small article in a copy of NME back in the summer of 1984 shortly after both the The Selecter and Fun Boy Three announced they were breaking up that mentioned this band (really a one-off project) was planning to record. It sent me on a search that finally culminated earlier this week.

Pauline Black with Sunday Best features the unmistakable vocals of The Selecter frontwoman. After the band split, Black released a few singles including "Pirates on the Airwaves" which included Neville Staples and Lynval Golding, formerly of The Specials and Fun Boy Three.

While I won't say this is the best song I have ever heard all three of them perform, its novelty makes it worth a listen or two as part of the ongoing history of 2Tone.

According to Vinyl Goldmine Pirates on the Airwaves has never appeared on CD even though countless Selecter and Pauline Black compilations have been put on the market over the years. Downloads of both the A and B side (which features the toasting of Neville Staple) are below courtesy of Vinyl Goldmine.

Pauline Black with Sunday Best - Pirates on the Airwaves

Hi there, its Frank from the Vinyl Goldmine. Thanks for linking to my post! I love The Selecter, but am equally fascinated by Pauline's solo stuff that followed. She actually recorded over two albums worth of material, but most of it was never released until much later (on the "Prime Cuts" CD). It is much more "80s sounding" than The Selecter, but it's got a certain pop charm that I love. You can find one of her solo singles, "I Threw It Away," on my site.

Also been looking for this for a long time...

All the best from Sweden.