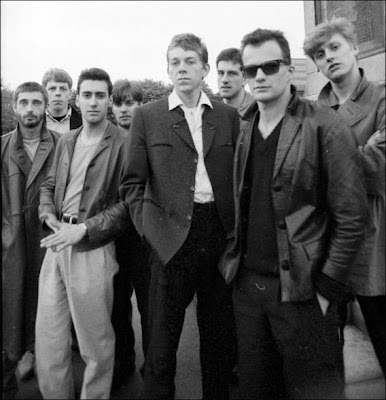 There is another band reunion in the works that will probably not rival the interest and attention that The Specials have generated, but it is one that is just as worthy. I'm speaking of The Bureau who have reformed to play shows and have recorded a new album, their first in more than 25 years. And like The Specials they have a great story to tell though with a northern soul soundtrack rather than a ska one.


The debut single "Only For Sheep" was a big hit in Australia, reaching #6, but failed to reach the British charts - as did the follow up single "Let Him Have It", inspired by the Derek Bentley / Christopher Craig case. An eponymously titled album was released in 1981, but only in Canada and Australia and the band members went their separate ways soon afterwards. Talbot went on to enjoy greater success with Paul Weller in The Style Council, Stoker joined Dave Wakeling and Ranking Roger of The Beat (along with Mick Jones of The Clash and Horace Panter of The Specials) to start General Public, while Brown formed Flag with ex-Secret Affair guitarist Dave Cairns. Blythe teamed up with former colleague Big Jim Paterson in The TKO Horns. 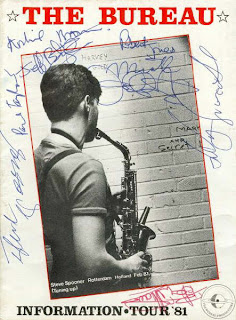 According to a great fan web site about the band, The Bureau toured America with the Pretenders. Part way through this tour they discovered that the money had run out and they were virtually bankrupt. They had no money for food and were reduced to scavenging from the Pretenders. The tour also included the Stray Cats. The Bureau opened the show and waited for the Pretenders to take the stage then each night they raided the Pretenders dressing room in search of food and booze. One night they were caught by the Stray Cats leaving the Pretenders dressing room with their swag bags. The Strays were leaning against the wall of the corridor outside the dressing room, very probably preening their outstanding quiffs. 'Hey man,' said Brian Setzer, 'That's not cool,' and Archie snaps, 'Right, that's fucking it!' he dropped his bags of swag, 'All of you, outside now! I'll fucking have the lot of you out now!!' The Stray Cats declined the offer of a fight, seemingly Runaway Boys is more than just a song. The Bureau managed to make it home and survived by wheeling and dealing their way across America. Archie sold tour passes to get Mick Talbot a bottle of whiskey for his birthday. Mick was actually assaulted outside one gig and required stitches to his face. The sight Talbot's face was enough to scare away any more trouble. The Bureau versus The Pretenders Campaign of 1981 passed into rock legend.

Here is a video of the band performing "Only For Sheep"


In March 2005, WEA re-issued the long-lost album. There were two gigs, at the Glee Club in Birmingham and Borderline in London. Defying geography, let alone history, The Bureau started to work on new songs, with Geoff Blythe flying from New York, and music and musicians flitting between London, Birmingham and Newcastle. In 2008 a brand new album was born, wryly dubbed "...And Another Thing". The original band will perform 3 shows in the UK to celebrate the release of the new CD on October 6th, 2008. You can hear previews of the new songs on the bands MySpace site.
Friday October 3rd
The Sound Bar
205 Corporation Street
Birmingham
West Midlands
Wednesday October 8th
The Cluny
36 Lime Street
Ouseburne
Newcastle upon Tyne
Thursday October 9th
Jazz Café
5 Parkway
Camden Town
London
Here is a download of their first single "Only For Sheep"

The Bureau - Only For Sheep
Posted by Marco On The Bass at 3:18 PM