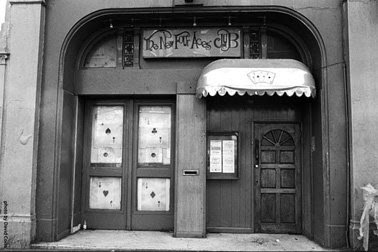 Clubs define a scene and they can take on mythic status. Here in New York, CBGB's (RIP) was host to thousands and thousands of bands but will forever be known as the place that launched The Ramones, The New York Dolls and Talking Heads. Personally, my youth is forever linked with City Gardens in Trenton, NJ. Its where I saw my first ska and punk shows and where my band made its first mark 20 years ago (here is a punk card promoting a show we played with Bad Manners in 1989).
The 2-Tone and reggae scene of the late 70's was also defined by clubs where important shows took place, The place to see The Specials and The Selecter in Coventry was Tiffany's (which is now the Public Library) and TiC ToC. The West Indian community in London had The Four Aces Club. I've just learned about a documentary screening of "Legacy In The Dust: The Four Aces Story" scheduled for Friday September 19, 2008 at Cafe OTO in Dalston, London. The documentary traces the history of the East London club famous for over 30 years as the home for black music and reggae music in particular.
The screening will be followed by a discussion with the club founder and owner Newton Dunbar and filmmaker Winstan Whitter and live music from UK reggae legends Winston Reedy, Princess Lin, Delroy Pinnnock and Freetown.

According to the Cafe OTO web site: Legacy in the Dust will take you on a sensational journey from the 1960’s when Newton Dunbar first arrived in the UK from Jamaica and founded one of the first Reggae-oriented music venue’s called ‘The Four Aces Club’, which for some 33 years was home to the most influential black music and musicians to date. It showcased new music genre’s like; Bluebeat, Ska, Rocksteady, Reggae, Jazz and Soul performed at the time by artists like Alton Ellis, Desmond Decker, Jimmy Cliff, Count Shelly, Ann Peebles, Percy Sledge, Ben E King Billy Ocean, Cimarons, Aswad, Black Slate, Matumbi and many others. This gave the club authenticity to attract artists like The Clash, Chrissie Hynde, Bob Marley, The Slits, Sex Pistols, Marc Bolan and Bob Dylan who were heavily influenced by the infectious pulsating rhythms!

The clubs success led to regular raids from the local Police, which gave it a bad reputation, the press targeted the venue as ‘A Yardie Drug Club’. Despite the negativity that clouded the club it went on to pioneer the early indoor Rave scene’s called ‘Labyrinth’ in the late 80’s during the days of Acid House, Happy Hardcore, Drum & Bass and Jungle music. It launched artists like; The Prodigy, Ratpack, Ragga Twins, DJ Slipmatt, Billy Bunter, Vinyl Matt and Kenny Ken. It came under fire from the landlord and was forced to close its doors in the late 90’s due to a compulsory re- possession ordered by the local Authorities, to make way for the regeneration in Hackney for the forth coming London Olympics in 2012.

Here is a 6 minute promo from the documentary:

Below are the event details. If you happen to attend please let me know.