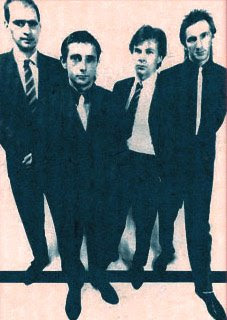 The life of a horn player in the world of modern music is an interesting one. I can't think of many contemporary pop bands that feature a single horn player, let alone a horn section anymore. Personally, I've always played in a band that has featured a horn section. I can't imagine life without them, both on and off the stage.

During the boom in ska, reggae, soul and pop music in the UK in the late 70's and early 80's, horn players and horn sections were everywhere you looked. The Specials had Rico and Dick on trombone and flugel horn. Madness had Lee (Kix) Thompson on sax. The Beat had Saxa on sax. UB40 had Brian Travers on sax, Astro on trumpet and Norman Hassan on trombone. Outside of ska and reggae circles, bands like Dexy's Midnight Runners prominently featured a horn section as did Paul Young's soul band The Q-Tips and later The Bureau (featuring members of the original Dexy's Midnight Runners and Mick Talbot of The Merton Parkas). All is all it was a very horny time.
It must have been this proliferation of music with horns that led artists like Paul Weller of The Jam and Elvis Costello to add horn sections to their bands and recordings in the early 80's. The Jam famously included horns and a horn section of their final album "The Gift" most notably on the track "Precious". Costello went a step further. Having heard the horn players in both Dexy's and The Q-Tips were now available (Paul Young had embarked on a successful solo career) he contacted them and asked to add them to his live band and to the recording of his next LP "Punch The Clock".

I have to confess that despite the fact that Elvis Costello is on record saying he hates the "Punch The Clock" album, it is one of my favorite recording. The album is pop at its best: catchy melodies/lyrics, good grooves, upbeat tempos, and well constructed song forms. It's a fun album with substance--what all pop music should aspire to be and it has horns!

The story of the well-known "TKO Horns" who add the punch to "Let The All Talk" and "Everyday I Write The Book" among others is best told by one of the members of the section. Saxophone player Paul Speare was a member of both Dexy's and The Q-Tips when he was tapped along with Jim Patterson (trombone), Brian Maurice (alto sax) and Dave Plews (trumpet) to join Elvis Costello & The Attractions. He relates the fascinating and interesting story in great detail at his web site. It's a great read and I highly recommend it.

Among the highlights: Learning charts for new songs and playing them for the first time at the Royal Albert Hall in the span of 5 days as well as touring the US, UK and Europe, recording the "Punch The Clock" LP and meeting Yoko Ono.

Paul's destiny also intersected with that of 2-Tone and The Special AKA, as Costello recommended him to Jerry Dammers who asked him to perform the tin whistle melody that features in "Free Nelson Mandela". He also performed on the studio version of "Keep On Moving" by Madness and "Actions Speak Faster" by Difford and Tillbrook.

Here is a live video of "Jackie Wilson Said" by Dexy's featuring Paul on Saxophone:


Here is the "Let Them All Talk" video featuring Paul and the TKO Horns that he references on his web site: