The Specials Reform & Perform at Bestival on The Isle Of Wight 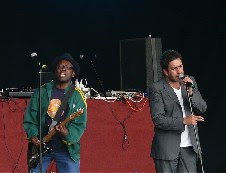 Well the rumor is true! The Specials (billed as Terry Hall & Friends and minus Jerry Dammers) were the surprise act today at Bestival on the Isle of Wight.

According to a post made by Roddy Radiation on his Web site, it's looking like six of the original members will be reforming and they will be touring using their own names because Dammers owns The Specials name. Jerry may take part at the last minute and apparently the door is still open but it appears doubtful he will join given Roddy's post below.

Here is Roddy's post: Even tho me and Brad + Nevelle wanted Jerry on board i dont think we would of got passed the third rehearsal somehow.. Jerry cleverman tho he is ,has always had some strange idears. At the last rehearsal that only 4 of us turned up at he said he wanted to play the old stuff half the tempo of the original recordings and proceeded to programe his very old battered drum machine.. We played "Stereotype" and by the end of the song my head was almost touching my guitar (i was playing sitting down) i felt like all the pain and bad memorys had come back to haunt me once again.. I dont think the Specials would be even considering giging if we had the seven together, it would of dragged on until next year with fewer and fewer members turning up.. Sad but im affraid very true*

More info as it becomes available.
Posted by Marco On The Bass at 6:04 PM