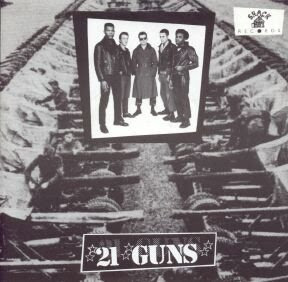 In 1981, following in the footsteps of Specials drummer John Bradbury's Race Records, vocalist Neville Staple's and his then girlfriend Stella (from The Bodysnatchers) launched Shack Records. Their first signing was ska/reggae band 21 Guns and the single included the songs "Ambition Rock" b/w "21 Guns". The songs were also produced by Neville, and peaking at #46 on the UK Charts after 3 weeks.
The band, formed by ex-Specials roadies Trevor Evans (Keyboards) and Johnny Rex (Drums) and included Kevin Turner (Bass), Stuart (Guitar) and Gary 'Judge' Chambers (Vocals), had previously recorded a three song session for John Peel in early February 1981 based in their connection with Golding and The Specials. The session included the A and B side of the single as well as the song "Dark Night".
The band scored a support slot opening for Hazel O'Connor and their short set list included their three original songs plus 2 covers ("Too Hot" by The Specials and "Johnny Too Bad" later covered by UB40).
The single is difficult to find, but if I come across it I will post it here.
Posted by Marco On The Bass at 3:05 PM

I arrived here after rediscovering the 21 Guns single in my cellar & deciding to google it (after singing along to the chorus & realising how easily I remembered it). Top track - I obviously bought it after hearing it on Peel - probably hadn't listened to it for 25 years or so :-( Nev

Just a quick note: Stuart(Guitar) surname was, and still is Maclean.
I know this as he is still gigging in the Huddersfield area!

omentwawHaven't tried downloading it yet but the 21 Guns single seems to be on this site http://www.mediafire.com/?gmynjzh0twm

I have the single somewhere probably lost in the loft.