Pictures of The Specials @ Bestival: The Reunion Moves Forward without Jerry Dammers 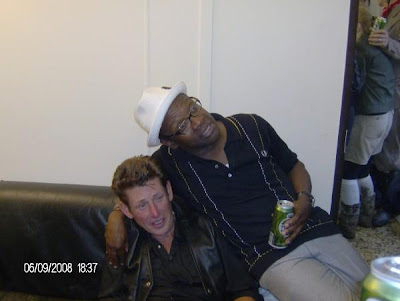 Word out of the UK is that "Terry Hall & Friends" (essentially The Specials without Jerry Dammers) played a bouncy and rapturously received greatest hits set at Bestival on the Isle Of Wight yesterday. I've included pictures from the show which were taken by Mike Cornwell the admin of The Specials.com community pages who attended the show.
The other side of this story that is still developing and has caused fault lines between the band members, their management, band insiders and hardcore fans is the exclusion of Dammers from the show yesterday and the reunion moving forward. In particular, hardcore fans of the band are upset that the first reunion of the band since Hall, Golding and Staple left following the release of "Ghost Town" took place as an unannounced "surprise" gig and that they were unable to make plans to attend. There is some discussion that the band of 6 decided this was the best way to play their first show together, away from the media crush and scrutiny that would have accompanied a high profile reunion show. 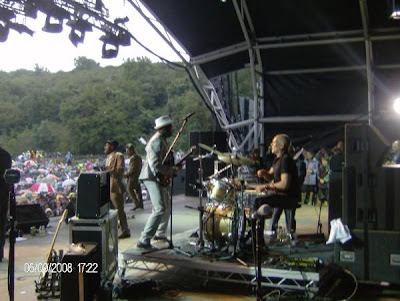 From what I can gather, Dammers was not told about the show yesterday and was not invited to secret rehearsals the other 6 members of the band held to prepare for it. This follows a war of words between Dammers and Terry Hall's manager that I posted about in July. In fact, its possible that Dammers took his complaints about being left out to The Specials.com community pages over the last few days and posted under a variety of aliases. I was able to read a few of the posts before they were deleted by the moderators. All in all they struck me as very angry and bitter and seemed to focus their vitriol at Terry Hall and his manager in particular with an emphasis on greed driving the reunion and that 6 alone without Jerry were not The Specials. That is likely why the band will not perform as The Specials if the reunion moves forward as expected. 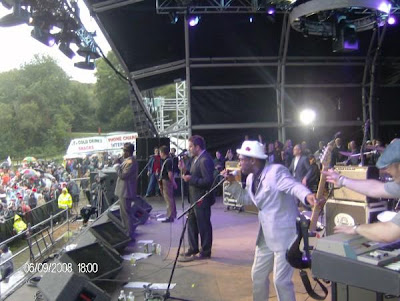 According to fans who attended the show, it opened with a minute long video introduction. They performed during a rain storm to a sea of multicoloured umbrellas bouncing up and down to songs including 'A Message To You' 'Gangsters' and 'Nite Club', Lynval introduced "A Message To You" with a strong message about when he was stabbed 25 yrs ago, '...I will never pick up a knife' said Lynval. One broken guitar string and broken organ key later it was all over. 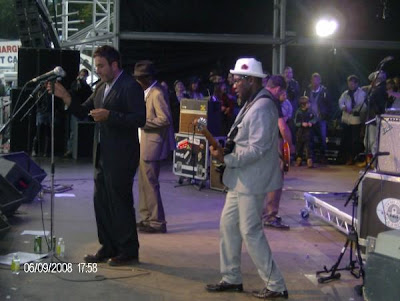 The set consisted of songs from the first album, starting with "Gangsters" and ending with "You're Wondering Now". There was a brass section and someone who filled in for Dammers on keyboards. Apparently Neville had to rush off to another gig but the rest of the band spent the evening celebrating with their families, except for Lynval who hung around in the thick of the crowds (and mud) to watch Amy Winehouse. 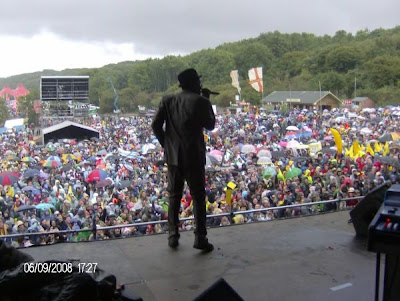 I'm thrilled the band have decided to reform. While I'm saddened that Jerry will not be a part of the band, I can also empathize with the decision to move on without him. My conversation with Lynval earlier this summer suggested that the band would not be put off by Jerry's attempts to slow down, delay or postpone the reunion and that fact that all 6 have decided to work together without Jerry would indicate solidarity on that position. After nearly 30 years its time to music above personality conflict (see The Police) and get on with it. I for one can't wait to see them.