The Stiff Records Story As Narrated By Suggs of Madness 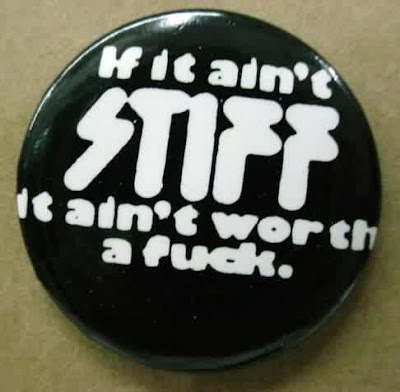 As 2-Tone Records and to a lesser extent Go-Feet Records (The Beats personal imprint) showed, it was independent labels that were driving the ska scene in the UK. However we would be remiss to overlook the incredible impact of Stiff Records had on UK music and culture.
When new wave hit in the '70s, independent labels like Stiff Records became a grass-roots alternative to the music establishment. Stiff Records which started in 1976 set itself apart with marketing and advertising that was provocative and witty. Stiff billed itself as "The World's Most Flexible Record Label". Other slogans were "We came. We saw. We left.", "If It Ain't Stiff, It Ain't Worth a Fuck", and "When You Kill Time, You Murder Success" (printed on promotional wall clocks). On the label of Stiff's sampler compilation Heroes & Cowards was printed: "In '78 everyone born in '45 will be 33-1/3". A very early Stiff sampler album, A Bunch of Stiff Records, introduced the slogan, "If they're dead, we'll sign them" and "Undertakers to the Industry".
Elvis Costello, Nick Lowe, Ian Dury, and Madness are just some of the eccentric greats who emerged via Stiff, but other lesser knowns, notably The Equators were key to the world of ska. What unified Stiff's musical menu — punk, R&B, pop, ska, soul, nonsense — was a rejection of standard rock & roll excess and the belief that money isn't the only reason to make records.
Leave it to the talented folks at BBC6 and Madness frontman Suggs to tell the story of the influential record label, home to artists ranging from Motorhead and The Damned to Kirsty Macoll. Amazingly Stiff Records still exists albeit in digital form alone and only after taking a nap from 1986 to 2006. You can visit the new Stiff Records site here.
Thanks to Judge Fredd for the heads up about this great piece of radio journalism.
Here are the downloads in four parts:
The Stiff Story Part 1
The Stiff Story Part 2
The Stiff Story Part 3
The Stiff Story Part 4
Posted by Marco On The Bass at 6:06 PM