My Favorite 2-Tone Era Album Of All Time: Celebrate The Bullet 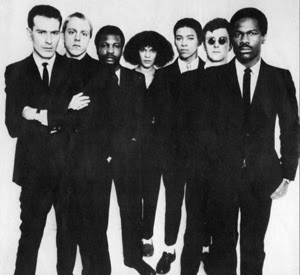 However, in my humble opinion "Celebrate The Bullet" broke the mold and remains the most creative and unique collection of songs to come out of the whole 2-Tone era. I wouldn't even call it a ska album necessarily. This is a dark, haunting, bluesy iteration of ska that to my knowledge has never been attemped before or since (No Doubt tried and failed). This is very intense and emotional music. For that reason, it is a very unique record and it goes against the grain of what fans of 2-Tone probably expected when it was released. At times the songs have a new wave feel via synthesized keyboard melodies that buzz over Neol Davies' blistering, bluesy and soulful guitar solos and riffs. Other times its almost undefinable as the songs are driven by a seamless melting pot of rock, reggae and new wave via memorable melodies that stick in your head. In fact, I would argue that 'Celebrate The Bullet' is on par with 'Ghost Town" as one of the best songs of the 2-Tone era. And personally, its the very end of 'Bristol and Miami' when there is an acapella chant taken from The Beatles 'Black Bird' that seals the artistic and emotional quality of the record for me. 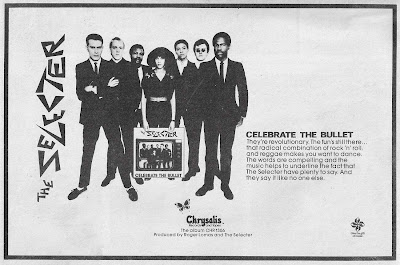 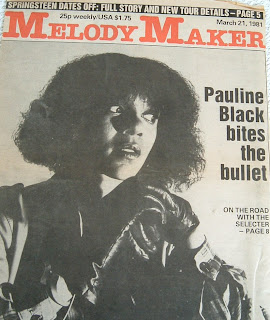 While the music is a step above, what stands out above all though is some absolutely great vocal work from Pauline Black. Black seems to channel her own musical heros (Billie Holiday, Nina Simone) and their presence can be felt in the music. Unlike The Specials ironic take on British society and Madness's nutty view of English life, The Selecter's second album come across like a very dark and serious news report with Pauline and Arthur "Gaps" Hendrickson reporting from the frontlines of an early 80's Britain straining under the reduced expectations of Thatcherism (sound familiar??). Indeed the songs and their subject matter seem spookily relevant for those of us in the U.S. who have barely survived 8 years of George Bush, the Iraq War, Hurricane Katrina, mortgage foreclosures and a financial meltdown that threatens to devour the life savings and job security of all of us. 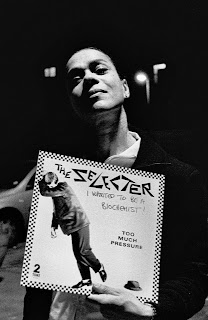 Here is video of the band performing "Celebrate The Bullet" live on the Old Grey Whistle Test in 1981:

Here is the promo video made to promote the song and the album:

I had the honor and pleasure to meet Pauline Black and Neol Davies when my band supported The Selecter when they reformed and toured the US in 1991. I most recently saw her when she and Lynval Golding of The Specials sat in with The English Beat in 2006. The highlight of those shows was when Pauline came out mid-set to perform 4 songs by The Selecter. She has always been very kind and accessible and remains a true artist to this day having acted in a number of UK TV shows and stage productions in addition to her singing with The Selecter and as a solo artist exploring soul. She recently agreed to conduct an interview with me about the "Celebrate The Bullet" album, which also happens to be her favorite by the band. Unfortunately, due to unforseen circumstances the interview has had to be delayed. Hopefully it will be rescheduled some time in the near future.

In lieu of that interview, below is a great clip featuring an interview with Pauline about her recollections of gigs at the Hammersmith Palais in London:

Finally, below is a download of a live show by The Selecter from Milan, Italy in late 1980 that includes most of the songs from the "Celebrate The Bullet" LP (Thanks to Judge Fredd of The Beef, The Original And The Cover for the link!):

same here. celebrate the bullet tops the revisits i had of the ska-revival era. really good album. the other one i kept playing is Bad Manners' Looney Tunes! Funny shit but very musical.

I know this post is 5 years old, but I just wanted to say that it's a fantastic write-up and tribute to this album. I agree that "Celebrate the Bullet" is the greatest and most daring 2-tone era album ever. It is truly unique and I get a bit irritated every time I read one of those negative reviews! I would love to hear that live show, but as expected after all this years the link is dead. Is there any place else I could get it?