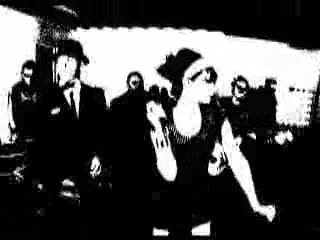 From what I can gather, Skye Sweetnam is Canada's slightly punk version of Britney Spears with a twist. Though she served as the singing voice for Barbie in The Barbie Diaries and she recorded a song in simlish for the release of The Sims 2: Pets, she has also worked with Operation Ivy and Rancid front man Tim Armstrong and recorded one of the best ska songs of the last 5 years, the nearly perfect "Into Action."
The song was written by Armstrong for Sweetnam's album "Sound Soldier", but was also re-recorded by Armstrong and Sweetnam with Southern California ska and reggae stalwarts The Aggrolites, and it appeared on Armstrong's solo LP " A Poet's Life" which is his love letter to 2-Tone ska. The song was one of the most requested songs ever at Los Angeles radio station KROQ-FM. Armstrong's love of 2-Tone has been clear for some time and has influenced many of the songs he has recorded with Rancid (have a listen to Time Bomb or Roots Radical). He also sang guest vocals for the song "Fearful" on The Specials Mk2 LP "Guilty Till Proved Innocent".
Now Sweetnam has versioned the song with her own lyrics (the two versions share a chorus) and released it, along with a very watchable video. I think Gwen Stefani may finally have some competition in the rude girl department. Here is Skye Sweetnam's version of the "Into Action" (I really dig the Emma Peel vibe to the video!):

Just so you are up to speed, here is Tim Armstrong's original version with Skye doing backing vocals and The Aggrolites backing it all up. I love the whole 2-Tone vibe to this one:

she is a babalonious pig. Corporate filth attempting to cash in on something she has no idea about.