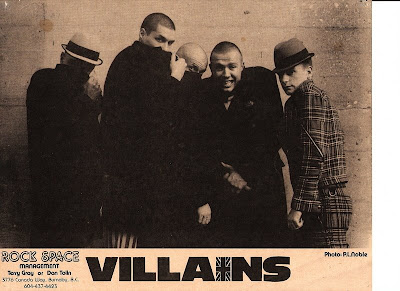 The period of 1978-83 was a very fertile time for ska music on both sides of the pond. While the UK had The Specials, Madness, The Selecter and The Beat and the US had The Untouchables and The Hoovers, Canada had The Villains. Never heard of The Villains? It's fair to say that The Villains were one of the most popular bands in Canada from 1980 - 1986 and made a huge impression on the Canadian media and public becoming synonymous with ska in the Great White North. For those who never saw the band, there were a 2-Tone styled musical circus that toured the country non-stop.
The band was founded when Canadian lead vocalist Count Steve and saxophone player Tom Perry met in Vancouver, B.C. in the late 70's as the sounds of 2-Tone made their way from the UK to Western Canada. Sensing a musical opportunity and recognizing that Canada had no ska scene to speak of, Count Steve traveled to the UK with a mission to recruit the best drummer, bass player and guitarist he could find. Perry stayed in Vancouver with a plan to travel to London to rehearse as soon as the other band members were recruited. Once Count Steve arrived in London he placed an advertisement in the NME and was swamped with calls from interested musicians. 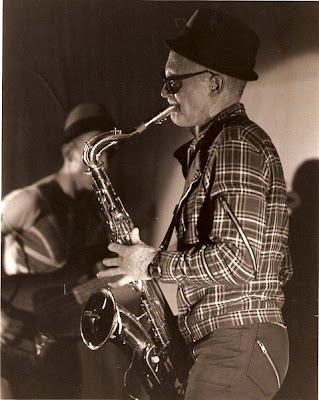 Count Steve rented a small rehearsal space in a studio in Brentwood, Essex with a view to auditioning a guitarist and bass player. Out of the session came Dave Neal who had been playing guitar in a pop band and Tom Robinson who had a distinctive funk flavor to his bass playing. The final piece of the band puzzle was solved when a young skinhead drummer named John Jacobs arrived with his father to audition as the drummer. With no tour, work permits, accommodation, or recording contracts Count Steve managed to persuade John’s dad that this was going to be a great opportunity for John.

The band spent several weeks in London writing songs and rehearsing Ska favorites and covers that the band could perform in Canada, as well as writing their most popular song 'Life of Crime'. Before returning to Canada, the band visited a clothing shop called The Last Resort, which was located in Petticoat Lane, London. There the band became fast friends with the shop owners, and spent considerable time there. They were kitted out with crombies, pork pie hats, tartan bondage trousers, Doc Martins, blue suede creepers, braces, T Shirts, black wrap around shades. The band wrote the song 'Urban Skins' as a way to chronicle all the time they spent at the Last Resort.

Shortly after arriving back in Vancouver, the band found itself in the middle of an event that made front page headlines and coverage on local and national Canadian radio and television that established them as national headliners. Performing in front of a packed club in downtown Vancouver, the band were arrested on stage in the middle of a set by Canadian Immigration Officers. There are famous pictures of the band stepping into a paddy-wagon, dressed in full ska/punk gear, tipping their pork pie hats to the photographers (see the news story below). The local booking agency had snitched off the band to the officials, saying they may not have working visas (turns out, the band had blagged their way through customs in Vancouver). Ironically, there was a civic strike in Vancouver at the time and the normal immigration detention center was not available, so the band were taken to the local prison. However the band's reputation had already preceded them and the word inside the prison was that these guys were famous musicians and they were received and treated like rock stars including being asked for autographs for the warden's daughter. 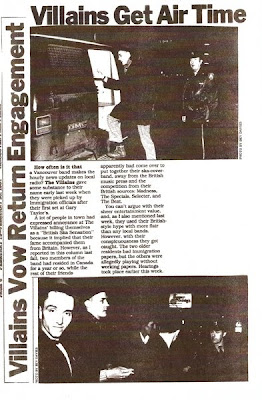 The band members made their appearance in court and were allowed to voluntarily depart the country and not be deported. At this point a Canadian management team, recognizing the valuable publicity the band had already generated, stepped in and the proper paperwork and performance contracts for a Canadian Tour were filed with the authorities and the band was allowed to return legally to Canada. Once back in the country the band's first performance was a free show for the inmates and the guards in the prison they had been held in, resulting in another wave of national media attention. 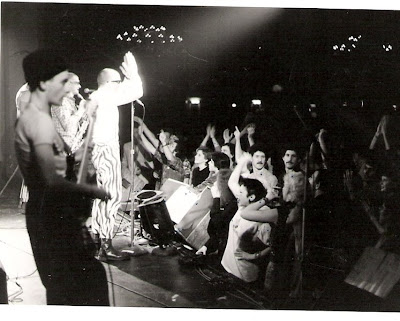 The Canadian press loved to give the band nicknames like: Ska Na Na, the Blues Brothers of Ska, Pied Pipers of Ska. However, the excitement and buzz about band's live performances was not just a result of all the media attention, it was also largely because they were a truly great live band who played with an infectious energy on par with The Specials, Madness and Bad Manners. Indeed, The Villains approached everything with their particular wacky sense of humor and countered any negative skinhead labels by headlining Anti-KKK rallies and performing free concerts for sick kids in hospitals across the nation. The Canadian press embraced this fun spirit of the band and they went on a unprecedented 5 year run of non stop touring, sold out concerts, impressive merchandise sales and released 2 records in the process. This was all accomplished without the support of a major record label, in fact, The Villains are indie pioneers in Canada by recording and distributing a record on their own label (Skinhead Records) in 1980.

The Villains quit touring in 1986, as management and band members moved on to pursue other opportunities. The band had experienced some personnel changes over time and had morphed into a mainstream rock band and by the time they released a nationally distributed album on Attic Records called "Go Crazy" they were playing very few actual ska songs live. They were still an up tempo dance band but no longer a pure ska band, it was a calculated effort to cross over into the pop radio market and not the first time a ska band failed to make that difficult transition.

Recently, three original Villains expressed an interest in reforming and they have started writing new ska songs for a record scheduled to be recorded in 2009. Plans are in the works for a North American Tour following the re-launch of the band and new CD release - now scheduled for late spring 2009.

The band's first 4-song 1980 EP "Life Of Crime" is out-of-print and very hard to find. Below are videos of the four songs that were on the record including: 'Ska Music', 'Life Of Crime', 'Wooly Bully' and 'Urban Skins'.


You can read more about The Villains at their MySpace web site.
Posted by Marco On The Bass at 1:36 PM

Can't thank you enough for posting this Marco! Excellent choice!

Found their album at a local flee market, it was the first, and the best vinyl I've ever bought.

Well. I am so happy to have read this.
I am a Brit but lived in Vancouver when I was in my early to late teens. I struggled a lot in them days as my culture was British .. I was the only skin in Canada (as far as I was aware) and longed for mutual friends.
I still cannot remember the club but I am sure it was down Granville (a big venue as I remember) and I went in aged 16 ((with a doctored Brit passport). That night changed my life in Vancouver.
I was spotted in the crowd doing my "Chaz Smash" routine and asked to get up on stage and just dance... Too cool.. I became a follower and went to all the gigs thereafter... It was a long time ago but wonder if any of the guys reading this remember.
I have traveled all over the world since then but have decided to pay a visit to Vancouver this year and would love to catch up.
If any of the guys read this, email me on philk2485@yahoo.co.uk

Hello Phil yes i do remember you mate....it was a long long time ago but happy days,not many skinheads in Vancouver when we first came over!.cheers Steve.

I have been looking for their official music video for Go Crazy. It got regular rotation on Much Music but now all I can find is the song. The video has disappeared