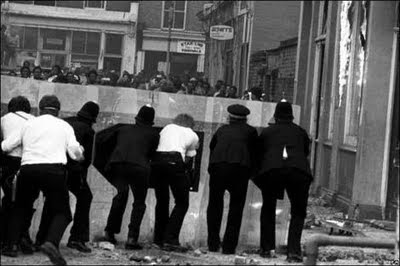 The Brixton Riots kicked off 30 years ago this week in London on April 11, 1981. Following sharply on the heels of riots almost exactly a year earlier in Bristol, they preceded similar riots that fanned out across the U.K. later that summer. Between July 3rd and July 11 of 1981, there were more riots fueled by racial and social discord in Birmingham, London, Liverpool, and Manchester. There were also smaller pockets of unrest in Leeds, Leicester, Southampton, Halifax, Bedford, Gloucester, Wolverhampton, Coventry, Bristol, and Edinburgh. Though racial tension played a major part in most of these disturbances, they all broke out in areas hit hard by unemployment and recession.

According to a Time Magazine story published in 1981 on the Brixton riots:


It was the kind of warm spring Saturday afternoon that draws all of London into the streets. As two bobbies pounded their beat in Brixton, a grimy, racially mixed neighborhood south of the Thames, they stopped to question a black youth. A hostile crowd gathered, and suddenly all hell seemed to break loose. Rocks, bricks and Molotov cocktails began to fly. As police reinforcements rushed in, an orgy of burning and looting swept down Railton Road, a principal neighborhood shopping avenue, leaving automobiles gutted and shops in flames. Streets were littered with looted appliances, clothing and costume jewelry. At the peak of the violence, more than 1,000 police in riot gear, huddled like Roman legionnaires behind shields, battled some 600 black West Indian youths, interspersed with a few masked white rioters.

A British government report commissioned following the riots found unquestionable evidence of the disproportionate and indiscriminate use of 'stop and search' powers by the police against black people as a cause for the riots. Left unspoken was the outright racism displayed by many members of the London police force who were notorious for wearing National Front buttons on their uniforms to provoke and outrage. As a consequence, a new code for police behavior was established in 1985, to attempt to restore public confidence in the police. For more details about the causes and impact of the riots, watch Director Rachel Currie's 2001 documentary 'The Battle for Brixton,' which is one of the most comprehensive video chronicles of the unrest. Watch the program in its entirety below:

The Bristol and Brixton riots had a significant impact and influence on the ska and reggae musical community in the U.K. Eerily, The Clash had a musical premonition of things to come releasing 'Guns Of Brixton' two years before the riots. The reaction from other artists immediately following the riots was swift including literal swan songs from 2-Tone bands The Specials ('Ghost Town' topped the pop charts as the country seemingly went up in flames) and The Selecter ('Bristol and Miami' from 'Celebrate The Bullet') and from reggae artists Linton Kwesi Johnson ('The Great Insurrection') and MCs Roy Rankin and Raymond Napthali, who produced 'Brixton Incident' right after the riots.

Jerry Dammers of The Specials' composed Ghost Town, a mournful state-of-the-nation rant, based on their depressing experiences of touring the UK in late 1980 and early 1981. The song captured the political mood of the U.K. and its rise in the charts each week during the summer of 1981 peaked at number one just as riots broke out in nearly every major city in the U.K. Watch the band in their very last appearance together 'performing' the song on Top Of The Pops.

The Selecter recorded their front line dispatch with the much overlooked 'Bristol & Miami' on the 'Celebrate The Bullet' LP released in 1981. It refers to the riots in both cities brought about by police abuses (stop and search Sus laws in Bristol) and brutality (the beating death of Arthur McDuffie at the hands of five white police officers in Miami). Watch Pauline Black and Arthur 'Gaps' Hendrickson's version of The Selecter perform the song during the show to celebrate the 30th anniversary of the 'Too Much Pressure' album last fall.

But perhaps the most powerful indictment of the police actions in Brixton may be Linton Kwesi Johnson's 'The Great Insurrection' whose lyrics see the riot as the first shot in a cold war with 'Babylon':


It was April 1981,
Down in the ghetto of Brixton,
That the Babylon cause such a friction,
That it bring about a great insurrection,
And it spread all over the nation
It was truly an historical occasion
It was the event of the year
And I wish I had been there
When we ran riot all over Brixton
When we mash up plenty police van...
When we mash up the Swamp '81

I have been trying find the full lyrics for 'The Great Insurrection' but with no luck, can you post / mail / provide a link to the lyrics.

Many thanks if you can.