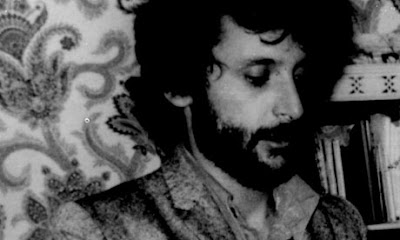 Tomorrow, Saturday April 23rd 2011 marks the 32nd anniversary of the murder of Blair Peach at the hands of London's Metropolitan Police. Peach's case became a cause célèbre in 1979 and for many years afterwards. The circumstances surrounding his death have been fiercely debated for years. Pictures of Peach later became an icon of early-Eighties U.K. political activism. Another victim was Clarence Baker, manager of British reggae band Misty In Roots, who was left with a fractured skull and a blood clot of his brain and took a year to recover from his injuries. Peach was memorialized by reggae dub poet Linton Kwesi Johnson in his song 'Reggae Fi Peach,' and Baker by The reggae/rock band The Ruts in 'Jah War',

Peach was an improbable martyr.  The New Zealand native was a school teacher in London.  He was also a member of the Socialist Workers Party and an activist with the Anti Nazi League opposing the rise of the National Front when he was killed during a demonstration in a predominantly Asian and Sikh area of Southall in West London. Though evidence was finally released last year that suggested police officers were responsible for Peach's death, to this day, no one has been brought to justice for his death. Later, when the lockers and some houses of Special Patrol Group members were searched following the incident, truncheons, knives, bayonets, swords and Nazi regalia were found.

According to an article in The Guardian last year:


The police handling of the Southall protest which led to Mr Peach's death was abominable. No public statement of sympathy was ever made by the police. In spite of detailed criticisms and complaints at the time about police conduct, including the killing, no police officer was ever disciplined in any way, much less prosecuted for any act committed at Southall. Police refused to offer evidence or to co-operate with the independent inquiry.

The events leading to Peach's death were part of demonstration opposing the National Front who had announced it would hold a "general election" meeting in Ealing Town Hall on Monday April 23, 1979. Local people were appalled, but the local Tory council approved the National Front's permit to meet. Local activists did all they could to get the meeting banned. The day before 5,000 people marched to the Town Hall, but the then Labour home secretary, Merlyn Rees, refused to ban the meeting. As a result, three thousand police, with dogs, horses, riot vans, a helicopter and units of the notorious Special Patrol Group poured into Southall to 'defend the peace.'

At lunchtime Southall's shops closed in protest. Some factories shut down and Asian workers at nearby Heathrow airport walked out. Anti-Nazis arrived in Southall in solidarity. Later some demonstrators tried to get on a bus going through the police cordon. The police threw everyone off. According to eyewitnesses


"At about 6.30pm people started to go towards the town hall. Suddenly the cordon parted and police on horseback came through and started to hit people with long batons. They attacked men, women and children." Police vans speeded through the hemmed-in crowd."

Inside the National Front meeting the local candidate for upcoming parliamentary elections was pledging to "bulldoze Southall to the ground and replace it with an English hamlet". Outside people were confronted with a full-blown police riot. The Daily Telegraph reported what happened:


"Within three minutes mounted police had cornered about 50 demonstrators against the churchyard walls. As we watched, several demonstrators were dragged crying and screaming to the nearby police station. Nearly every demonstrator had blood flowing from some injury."

The police surrounded an area designated as a first aid center, kicking in the door and forcing everyone to run a gauntlet of truncheon blows to get out. At least three protesters were hit so hard their skulls fractured. Blair Peach was one of them


"At least two Special Patrol Group vans came up," remembers Blair's friend Jo Lang. "The officers got out and charged us. We ran, but Blair wasn't with us. So we went back to look for him. An Asian family had taken him into their living room. You couldn't see how badly injured he was. It was later said that he was hit with a lead-filled cosh. While he was in the ambulance he started having fits. At 12 o'clock they phoned and told us he was dead." 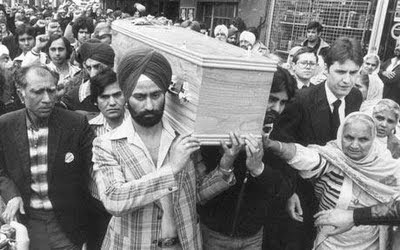 News of his death sent shock waves throughout Britain. The day before he was buried 4,000 local Asian people filed past Peach's body as he lay in Southall's Dominion Cinema. Throughout the night Asian youth from the area maintained a guard of honor over him. The next day the funeral travelled to east London as part of a 10,000-strong funeral procession.

Thanks for the perspective Marco. I wonder how many folks enjoy the music, as I do, yet have no awareness of the politics behind it.

Thank God LKJ didn't call it Reggae Fi Blair, that would have had some unfortunate overtones in today's post-Iraq-War world.