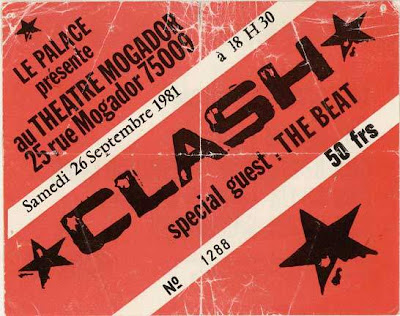 I'm off to see Big Audio Dynamite this week at the fabled Roseland Ballroom here in New York City.  I feel lucky to catch one of only two shows that the original line-up (Mick Jones, Don Letts, Leo Williams, Dan Donovan, and Greg Roberts) are playing here in the U.S. as part of their reunion tour.   I was also lucky enough to see B.A.D.'s very first show in New York back in late 1985, so in some ways I've come full circle.   While Joe Strummer and Paul Simonon get the lion share of credit for the influence that reggae played on the sound of The Clash, Jones was also a fan of the sound and actually established a friendship with both Ranking Roger and Dave Wakeling of The Beat and later General Public that had musical implications for all concerned.

There has always been a mutual appreciation society between Jones and Ranking Roger and Dave Wakeling. The Beat toured with The Clash (see the ticket stub above from a series of show the bands played together during a residency The Clash played in Paris in 1981) and it was on tour that Ranking Roger, who as a punk briefly played drums in a Birmingham-based punk band called The Dum Dum Boys, met Jones who along with Strummer and Simonon were incorporating reggae into their sound. 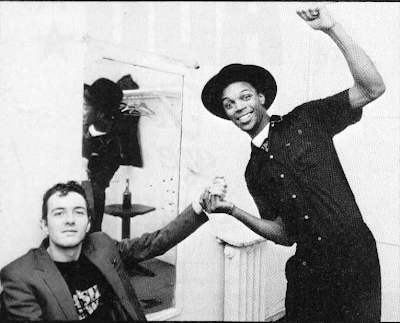 First a little bit of history. In case you didn't know, The Clash album 'Combat Rock' was originally planned as a double album with the working title 'Rat Patrol From Fort Bragg', but the idea was scrapped after internal wrangling within the group. Mick Jones had mixed the first version, but the other members were dissatisfied and mixing/producing duties were handed to Glyn Johns, at which point the album became a single LP. This intra-band arguing soon lead to Jones departure from the band. However, the original mixes have since surfaced and bootlegged versions are floating around the Internet. Jones was such a fan of Ranking Roger and his vocal style, that he invited him to toast on his mix of 'Rock The Casbah'. The version did not make the 'Combat Rock' album, but it cemented a friendship that has gone on to this day. In fact Ranking Roger's version of The Beat still play a cover of 'Rock The Casbah' as part of their live set.

Here is the alternate version of 'Rock The Casbah' featuring Ranking Roger as mixed by Mick Jones for 'Rat Patrol From Fort Bragg':

Both The Clash and The Beat broke up around the same time in mid-1983, with Strummer and Simonon 'firing' Jones from the The Clash and Dave Wakeling and Ranking Roger leaving to start General Public. Wakeling and Ranking Roger joined up with keyboardist Mickey Billingham (Dexys Midnight Runners), bassist Horace Panter (The Specials) and drummer Stoker (Dexys Midnight Runners/The Bureau) to form the new band. Jones was originally announced as a band member, and based on his friendship with Ranking Roger agreed to come on-board. However, by the time the 'All The Rage' album was released in 1984, Jones had left to form Big Audio Dynamite, although he did play guitar on the majority of the album’s tracks.

Wakeling did an interview in 2009 speaking about the musical role and contributions that Jones played on the first General Public album:


Well, we did a bit of a barter deal. He had left the Clash and was starting Big Audio Dynamite, and he said to me that he had a load of lyrics, but he liked the way I played with the vocal melodies, and if he gave me a cassette of instrumentals, would I do some la-la-la and humming and ideas for melodies? And he would fit his lyrics around those, if they fit. So I did that for him, and in the process of doing that, I said where we were with General Public, and he was my favorite guitarist of all time, and would he be willing to play on some of the tunes? So we gave him the songs as they were demos and let him get a feel for them. And we asked about rehearsals and that, but he was a very intuitive player, and he said, “No, I’ve got an idea of the songs now. Wait ‘til you’ve got a finished song that’s begging for a lead guitar part, and I’ll just come down. I’m not precious about it. I’ll just play loads of things and you tell me what fits and throw away the rest.”

Although he had a very casual air about him, Mick was an incredibly hard-working musician. He would stay playing the guitar for hours and hours, searching as he played along with the track for what he thought resonated. And over the course of a few sessions, we got some of the most fantastic guitar parts for “Tenderness,” “Where’s the Line,” “Never You Done That, “Hot You’re Cool.” We got him mainly, I think, just to play on the songs that we thought might be potential singles or that had that smell of a hit about them. And then we let him pick some other songs that we played him, and he said, “Oh, yeah, I’ve got a part for that.” And we let him play on “As a Matter of Fact,” I think that was one of the ones he picked out.

I had to control Ranking Roger a bit, though, because…I wouldn’t say he was a control freak, but he had a very particular opinion about everything. So Mick Jones would be starting to play something, and Roger would be on the intercom straight away, “Uh, Mick, could you try something like…” And I could see Mick Jones start to get frustrated, y’know? I let it go on about two or three times, and then I thought, “Oh, no, this could spoil stuff.” So, eventually, Roger went to push the intercom button, and I grabbed his hand, and I said, “Here’s an idea, Roger: why don’t you let the best guitarist in the world play what he wants? And if, at the end of the night, you still don’t think you’ve got what you need, then come up with a suggestion. But as you can’t actually play the guitar, why not shut up?” (Laughs) And there was a tense little moment, but he let Mick Jones do his thing, thank God!

Jones returned the favor to Ranking Roger in the mid-90's, inviting him to sing on the track B.A.D. track 'Harrow Road'. Ranking Roger joined Big Audio Dynamite full-time from 1996-98 and performed at several live shows with the band. Ranking Roger also joined the band in the studio to record the album 'Entering A New Ride.' However, the band broke up shortly after he joined when its last album was shelved by the record company and they refused to release it. In 1997, the band launched a new web site, primarily as a means to distribute songs from the Entering a New Ride album to the group's fans. The album is one of the earliest virtual albums ever and is available all over the Web.

Here are several tracks from the album including 'Sunday Best' and 'Must Be The Music' and 'Nice & Easy':

great post mate,thanks very much.i didnt know that ranking roger was in b.a.d so thanks for the history lesson!cheers marco

Thanks for this. The Clash and the Beat are two of my favorite bands - i've always wondered what exactly Mick's role was on ...All the Rage. Hadn't seen that Wakeling interview before.

And i'm insanely jealous about the BAD show in NYC. Why of why must they skip the middle of the country?

Holy crap! The version of "Rock the Casbah" with Ranking Roger is awesome. This would have been massive had it been released back in the day.

Remind me a lot a memories, specially when Rankin' Roger went back on stage with the Clash