The Story Behind The Members Reggae Version Of Kraftwerk's "The Model' 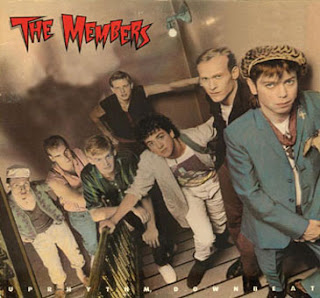 I have to admit that the first time I heard 'The Model' it was not the classic Kraftwerk electro version but an awe inspiring reggae cover version recorded by The Members from their 1983 'Uprhythm, Downbeat' album (the one with 'Working Girl' on it!).  It was only a few years later when I became a fan of Kraftwerk that I finally made the connection between the two songs.

Inspired by the models who worked at The Bagel nightclub in Cologne, the original version of song is the story of a high fashion model as she gets through her busy day. The song first appeared on Kraftwerk's 1978 album 'The Man Machine'. It was released as the B-side of "Neon Lights," but German DJs preferred to play 'The Model.' At the time the song made no impact outside of Germany. Released as an English language version in the UK as a double A-side along with 'Computer Love' in 1981, the track went to straight to #1 confirming its universal appeal.

Best remembered for their punky anthems, The Members never really achieved the widespread recognition that their musical vision deserved. Led by vocalist Nicky Tesco and guitarist JC Carroll, the band later incorporated reggae into their sound and like The Clash played fully formed reggae songs (check out their fantastic version of 'Offshore Banking Business').  This was no bandwagon jumping.  Tesco (like Paul Simonon of The Clash) was a long-time reggae fan as far back as the early 70's.


"In 1972 I went to university in Liverpool and discovered reggae big time spending a lot of my time in various dub clubs."

Tesco put The Members embrace of reggae in perspective in an interview:

“To many people we are just a footnote. But I know Jerry Dammers was quoted somewhere as saying we were a major influence. We incorporated reggae to a greater degree than any other band, even the Clash, but we weren’t in any way as important as the Clash.”

Its my humble opinion that The Members version of the 'The Model' may be one of the most overlooked songs ever recorded by the band who wholeheartedly embrace a full on reggae sound for the song, transforming it into lost classic of the 80's. Appearing on 'Uprythym Downbeat' (sort of The Members' own version of Sandinista! in its appealing looseness and lack of consistent musical focus) the band joined up with producer Martin Rushent (Human League, Altered Images, the Go-Go's), who was a master of helping unpromising non-commercial bands have big shiny hit records without losing their souls in the process. According to an interview I did with JC Carroll, the reggaefied version of 'The Model' was an unplanned last minute addition to the album.


It was recorded as an afterthought in the middle of the night on (producer) Martin Rushent's Human League synths. My mate Dave Allen mixed it

The unusual treatment of Kraftwerk’s 'The Model' which receives a lopping dub-styled workout with horns keeps the momentum going and is a completely inventive take on the original.  As Carroll said: 'We play English rock with a touch of reggae - and we do it so that people can enjoy themselves'.

Have a listen to the Kraftwerk version of 'The Model' and The Members version below.  Don't forget to play them loud!

It's a long time since I heard the Kraftwerk original, but listening to it now, you have hear it has a very reggae undertone, and was crying of for a full reggae version. Didn't someone in Jamaica also do a cover, I have vague recollections of much slicker reggae vershan from someone else?

Great post Marco! Nice to read the back story to that one.

Thanks Leopold, the Papa Dee vershan seems to be the closest to what I remember (a Sly & Robbie style slick riddim ting), but from what I can see that was only released in 2001, whereas I'm sure what I'm remembering was before then; late 80s perhaps.