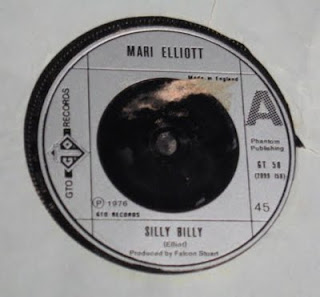 As a fitting tribute to Poly Styrene who passed away yesterday at 53 from breast cancer, I wanted to honor her musical memory with a rare rocksteady single she recorded for GTO Records in 1976 under her given name several years before becoming a Riot Grrl icon. A cautionary tale of the perils of teen pregnancy, 'Silly Billy' was not a commercial success, but has a sweet late 60's rocksteady sound that reveals a wonderfully warm and beautiful voice quite at odds with her later punk styled singing.

According to an obituary in The Telegraph, Poly Styrene was born Marian Joan Elliot-Said in Bromley, Kent, on July 3 1957.  Her mother was of Scottish/Irish descent, her father a dispossessed Somali aristocrat. Bringing up Marian alone, her mother feared that the local environment was “too white and too judgmental”, so they soon moved to Brixton where she could see her estranged father more often.

She ran away from home at 15 to live a hippie existence, drifting from one rock festival to another for two years before a bout of septicaemia brought her back to London. She then set up a boutique at Beaufort Market in Chelsea, and coined her future stage name.

After attending a Sex Pistols gig in a near-empty hall on Hastings Pier on her 18th birthday in 1975, she decided to become a singer. As 'Mari Elliot', in 1976 she released the unsuccessful reggae-flavored single on GTO Records. That same year, after placing an advertisement in the Melody Maker for 'Young Punx who want to stick it together', she formed the five-piece X-Ray Spex.

Have a listen to 'Silly Billy' below and toast her memory and her music! RIP Poly!

Goodbye Poly Styrene and thanks for the good times, good music and great lyrics, which were nothing short of ahead of their time and are as apt today as ever. You may Rest in Peace.

Had this cut been released a few years later during the 2 Tone craze, it might have done much better. It's a catchy little tune! Love it!

Very good reading as always in this blog.