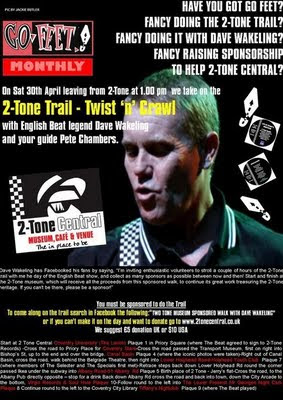 Hot on the heels of a 'prodigal sons returns' like show at the London International Ska Festival on Saturday night. English Beat front man Dave Wakeling is taking his band back to the birthplace of 2-Tone ska -- Coventry.  But before the band plays a homecoming show this Saturday night April 30th, Wakeling will lead  a very lucky group of fans on a sponsored walk down the 2-Tone Trail, a nostalgic guided tour through the streets of the city that birthed the 2-Tone sound.

Devised by 2-Tone Museum director Pete Chambers, the 2-Tone Trail will take a group of fans along on this step through the history of the key locations that played such an important part in the growth of 2-Tone. Accompanied by Chambers and Trail organizer Carole Quinney, Wakeling will return to a time when ska and punk beats were being fused to create a brand of music that not only had infectious rhythms but also had a unique social conscience too, effectively becoming a defining soundtrack to many fans who were living through a troubled times.

Proceeds collected by fans who sponsor the walk will go directly to the 2-Tone Museum which collects historical pieces from the 2-Tone heritage spanning seminal bands including Madness, The Selecter, The Specials, and, of course, The English Beat. Already many American fans who can’t make the trail have sponsored Wakeling to the tune of almost $800, and the sponsorship money continues to come in. According to Wakeling:


“The 2-Tone Museum has done a marvelous job starting to collect and display artifacts from the 2-Tone period and I’d love to see it continue. So, I’m asking fans around the world to sponsor me $10 or £5 UK by visiting the link on the 2-Tone Central website to help develop the program even further.”

Sites to be visited along the way are Coventry University (where The English Beat met The Specials founder Jerry Dammers and signed to 2-Tone Records), Central Library (once the site of Tiffany’s Nightclub where The English Beat once played) and 51 Albany Road (The Birthplace of 2-Tone). A stop-over is also arranged in the recently re-opened Albany Pub on Albany Road.

The sponsored 2-Tone Trail-Twist and Crawl, begins at 2-Tone Central at 1:00pm, but you must have sponsorship to take part in the Trail. Some lucky "Trailers" have been promised a chance of attending the band’s sound check at the venue.

For more information, go to www.2tonecentral.co.uk.
Posted by Marco On The Bass at 3:59 PM