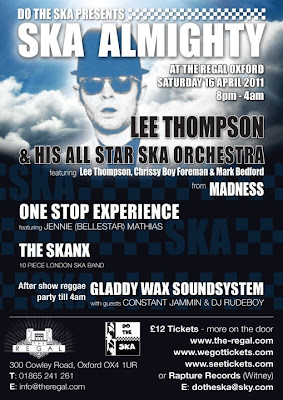 For those of you awaiting updates about the new Madness album with bated breath, you can come up for air this month to enjoy a special side project pulled together by a few members of the band -- Lee Thompson & His All Star Ska Orchestra. The band will be playing mostly instrumental ska/reggae songs (but its possible a few 'nutty' songs may be added to the set list). The brainchild of Madness saxophonist Mr. Lee 'Kix' Thompson, the All Star Ska Orchestra boasts a hand-picked line up featuring fellow Madness original Mark Bedford on bass and the following members:

Sadly, despite initial reports that Madness guitarist Chris 'Chrissy Boy' Foreman would also join, he has opted out. Here is sneak preview of the band hard at work rehearsing for their upcoming shows:

Courtesy of the good people at Madness Central, I have an update directly from Thompson's mouth about the orchestra that bears his name:


“The Ska Orchestra were formed recently in the back streets, just off the Hackney Rd. They live in different parts of N.E.W & Sth. London.Their common denominator being music & particularly them good old Ska & Reggae Riddums that burst out of Jamacia in the mid to late 60s."

It was just announced yesterday that the band has been added to the line-up of the upcoming London International Ska Festival at the Clapham Grand Theatre in London on Sunday April 24th as a substitute for The Ska Flames from Japan (who unfortunately had to cancel due to ongoing concerns in Japan).  The band will be playing a few shows in a lead up to the London show. The initial 'warm up gig' will take place at the The Prince Albert Pub in Brighton on Thursday April 14th. The band's first big headline gig will be at The Regal in Oxford on  Saturday April 16th.
Posted by Marco On The Bass at 6:20 PM

Just got my ticket for the Brighton show - cheers for the heads up!

Did you mean The Ska Flames? Because I think The Ska Flamers are on tour with Lady Gaga right now.
Sorry i couldn't help myself love the blog check it daily.

How can I find out more about Lee Thompson Ska Orcestra gigs, I believe they've just played at a shopping centre and I missed it again!