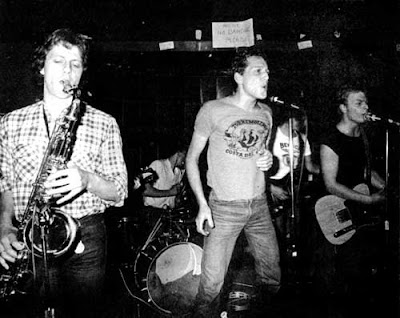 First I want to wish everyone a very happy new year. Indeed, 2009 is shaping up to be a very happy new year for fans of 2-Tone ska. I'm incredibly grateful that The Specials have reformed for their UK tour this coming spring and that Madness have released their first album of original material in nearly 10 years and that they will also be playing Madstock in London this coming June. Now, in the immortal words of Ian Dury, we have more reasons to be cheerful. Brighton's very own 2-Tone era ska band The Ammonites have announced that they have reformed and will be performing a show at the Portland Hotel and Rock Bar in Hove on Friday January 30th, 2009.
Outside of the well known core of popular 2-Tone bands (The Specials, The Selecter, The Beat, Madness, Bad Manners), I believe that there were two other unsung bands from the era that deserve more notice, attention and recognition than they received. One is The Akrylykz from Hull, who featured Roland Gift on vocals (look for a post about them very shortly) and the other was the Brighton-based band The Ammonites. I have posted about the band before and had the opportunity to interview their lead singer Stefan Tylunas.

Stefan recently posted on the Punk Brighton web site that he and his bandmates had decided to reform and that the reunited band will include four of the original members including himself, Nick Stewart (guitar), Steve Kelly (sax) and Mike Roberts (guitar). To celebrate, the Punk Brighton Web site has made a 15 song rehearsal tape the band recorded in 1980 available for a free download. The link is below. The songs should give any interested listeners a sense of the great ska/pop the band played and it should get those of you in the UK who plan to attend the gig excited to hear the band play live again after nearly 30 years. Enjoy!

Happy New Year, and Holy Shit.
I've never been more impressed with a website as I am right now.
I have a tatty scratched up old copy of "Dressed to Kill / Big Eaters" that's older than God and quite unlistenable. I never knew The Ammonites ever recorded anything else because the internet doesn't actually yield much information when it comes to the good stuff.
Thank you a million times for this post!