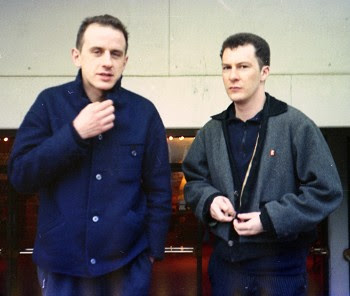 David Steele remains a musical hero of mine (though I also count Horace Panter and Paul Simenon as bass heros). I have always admired his innovative and inventive bass lines which define many of The Beat's classic songs and has influenced my own bass style(see 'Mirror In The Bathroom', 'Too Nice To Talk To', 'Twist & Crawl', 'Sole Salvation') He uniquely combined the Jamaican ska/reggae/pop bottom end that was the basis for much of The Beat's early material and added a harder, punk-influenced style which completely set them apart from their contemporaries.

In many ways I would consider Steele The Beat's secret weapon. Because he tended to avoid the spotlight (I could not find one picture of him alone anywhere on-line and the one above with fellow band mate Andy Cox from 1986 is from a great site called And What's Next ) he has not gotten the credit he deserves as a musician, songwriter and producer. Out of all the original 2-Tone era musicians, Steele and Terry Hall remain the ones who have explored musical genres far outside their early days playing ska. Where Hall wrote guitar pop songs with The Colourfield and Vegas, Steele has followed a path from techno dance to soul-pop and now classic soul and R&B.

Few pop musicians have an ear for talent and the patience of David Steele. Back in the Eighties, he and Andy Cox, spent a couple of years searching for the right singer for Fine Young Cannibals, before settling on the distinctive talents of Roland Gift. During and following their chart topping success with the Fine Young Cannibals, he and Cox worked producing acts as varied as The Wee Papa Girls, Monie Love, Pop Will Eat Itself and notably Al Green on his 1993 LP, `Don`t Look Back`. It was during all those recording sessions but particularly with Green, that Steele finally began to realize there was a lot more to making soul and R&B records than the Cannibals` trademark stylized pop take on the genre.

Here is the video for Monie Love's "It's A Shame" which bears all the hallmarks of Steele's early dance style:

According to an interview he conducted with The Guardian in the UK following his experience working with Al Green, Steele said, “I knew there was another level I could go to, and I also knew it had to be with somebody who wasn`t famous - because working with legends you`re too respectful. So - though it seemed a bit insane - I basically set out to find the new Aretha Franklin, no less! I was looking for the sort of old soul voice that today`s hip hop people would sample.”

And like his search a few years earlier for Roland Gift, Steele embarked on a similar quest for a new singer to serve as the muse for his songs. That was in 1994. And as the 21st Century rolled around, an unhurried-yet-determined Steele was still looking. Until finally, in the summer of 2001, a lengthy stay in New Orleans - centred around the city`s annual Jazz Festival - brought him into contact with a young local gospel vocalist, Jonte Short. One of the stars of the local Ebenezer Baptist Church choir, Short was also singing for pop audiences in night clubs to pay the rent. And, like many great gospel voices in America, hers was part of a family inheritance - having started singing aged just two with her brothers and sisters in a group run by her mother. In Short, Steele's unearthed a secularized gospel singer with more than a touch of Aretha Franklin. Like Gift before her, Short has a unique look and sound and like Gift, she takes Steele's songs to another level.

Calling themselves Fried after Southern U.S. cooking, the duo at once began both writing and recording together in New Orleans and set out to secure a record deal. The self-titled version of the record was released by London Records, home of the Fine Young Cannibals, but the company was going through hard times. In August 2005 London agreed to release them from their contract and they were quickly picked up by Sony/BMG, who've re-released the album in 2007 and titled it `Things Change`. It now features Sade`s Andrew Hale plus key contributions from former Portishead songstress Beth Gibbons and Wu Tang Clan`s RZA.
Below are two videos from the Jools Holland Live Show in 2004 featuring "When You Get Out Of Jail" and "Things Change":

Nice post. What I do miss is his former bandmate, drummer Everett Morton and how well they played together... It's that relationship that can really catalyze an already great lineup...

Man! Why am I just now seeing this? Thank you for the link, info! Thank you for keeping this site going. I have the need to come back time and again to get my fix!