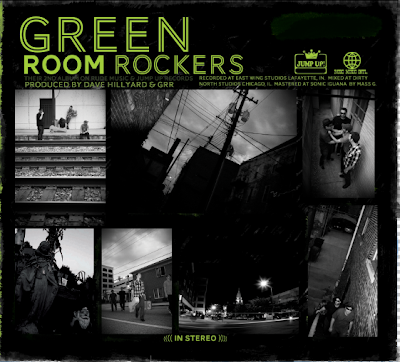 Lafayette, Indiana's very own Green Room Rockers (GRR) have just released a new self-titled album and with it they are making their case to be one of the brightest American ska bands on the scene. The record, which is the follow-up to their 2007 debut 'Hoosier Homegrown' was produced by Dave Hillyard of The Slackers, which adds to its bona fides.
The band hooked up with Hilyard when he e-mailed them an offer to collaborate in July of 2008. According to the band, it was a 2 sentence e-mail that said 'Hey, if you guys ever need a producer, give me a call'. The band took The Slackers saxophonist up on his offer and Hillyard flew into Lafayette from New York a couple times during the recording process, which spanned two years. Hillyard offered an ear that the band could trust and suggestions for song arrangements and performed on the instrumental dub 'Exit 178'.
Hillyard's influence is clear as GRR have experimented with a sound that comes close to where The Slackers and other band's influenced by them (The Forthrights) are taking American ska in the 21st Century, which is towards a rootsier, more 60's R&B sound with a definite emphasis on soul and blues. While most of the songs on the album retain a Jamaican-influence (a la Toots & The Maytals), there are a lot of songs that are a departure from the band's original rocksteady sound. Among the 14 tracks -- and two hidden tracks if you get the CD -- are a mix of familiar tunes, new songs and a few covers. Many of the songs have been road-tested and by playing them live over and over, the band perfected them before they were recorded. Of the batch 'You and I' offers the best example of the new GRR sound. Below is a video of the band performing the song in front of a hometown crowd.

You can listen to or buy a copy of the new album from Amazon.com: