Marco On The Bass Live review: The Toasters Live At BB King's in New York City 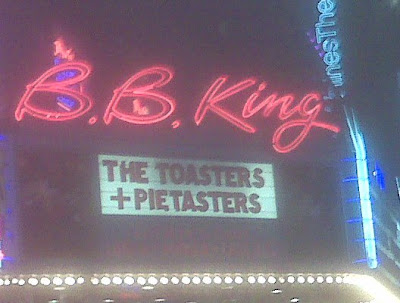 I regularly attended NYC ska shows held at CBGB's, the Cat Club and The Continental in 1987-1988 and that time period is owned by The Toasters, who were just about to rocket out of the New York scene to begin touring and preaching the gospel of ska around the U.S. The band and its impact and influence on ska in the U.S. can't be emphasized enough. So it was with great excitement and affection that I hopped the New York City subway a few stops to BB King's in Times Square last night to pay my respects to English guitarist/vocalist Robert 'Bucket' Hingley. Bucket is responsible more than any other musician for ska’s popularity in America, and for keeping faith in the genre through its many ups and downs. Hingley and The Toasters tour relentlessly and he has become a familiar face to ska fans all over the world.
Whenever The Toasters return to New York City to play, its always like one big ska family reunion and last night was no different. The bill included The Pietasters, Hub City Stompers and Royal City Riot, who like The Toasters are all touring and working hard to play and promote ska and the bill drew a very respectable sized crowd. I attended with my friend and fellow ska blogger Steve Shafer (Duff Guide To Ska) who worked for Hingley and Moon Records during the height of ska's popularity here in the U.S (see picture of Shafer and Hingley below). We also met up with Brett Trach who worked as a business manager for Moon Records and helped manage distribution for the label at the height of its popularity. Both Shafer and Trach shared some amazing stories and anecdotes about the ups and downs of Moon Records and the American ska scene which will hopefully be recorded at some point for a book or documentary about the label. These are tales and memories that really tell the story of ska in the U.S. and deserve a wider audience than just those of us having a pint or two together at the bar. 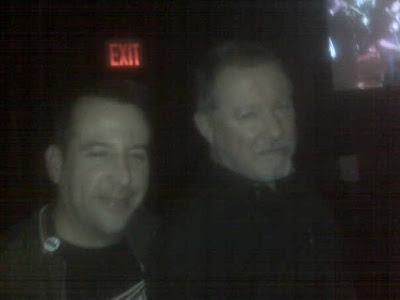 While Hingley is the only original member of the band, he never fails to attract a strong backing band of talented musicians. The current lineup on display last night was tight and talented. In particular, drummer/vocalist Jesse Hayes and bassist Thaddeus Merritt (formerly of Boston-based Westbound Train) make a tight, nimble rhythm section. Trumpeter Rich Graiko (also formerly of Westbound Train) in particular played a number of outstanding solos and long-time keyboardist Dave Barry (who has returned to play with the band when they are on the East Coast) added organ and piano that filled out the normally stripped down sound of the band. And in the middle of it all, Hingley (in his trademarked New York Yankees baseball cap) held center stage with his choppy rhythm guitar and his grainy tenor.

The Toasters’ songs may not be widely known among pop music fans, but to ska enthusiasts, they’ve become true classics. As an old school fan of the band I was happy to hear a few older songs from the band's catalog which took me back to all those shows I attended 25 years ago including 'East Side Beat (an homage to the band's old Manhattan neighborhood),' 'Two-Tone Army', 'Run Rudy Run' (a personal favorite of mine) and 'Weekend in L.A.' (which tells the story of the band's first visit to play Los Angeles). You can see live video of these songs below.

After nearly thirty years, over three dozen changes in the lineup, and just about every frustration and setback that a working musician can endure, Hingley shows no sign of slowing down. The Toasters are wrapping up a European, U.K. and U.S. tour that has kept them on the road for most of 2010. You can expect the same from Hingley and the band in 2011.
Posted by Marco On The Bass at 12:19 PM

who was the sax player? meant to catch his name at a recent show,talented young man

I believe his name is Anant Pradhan. He most recently played with the Void Union before joining The Toasters.