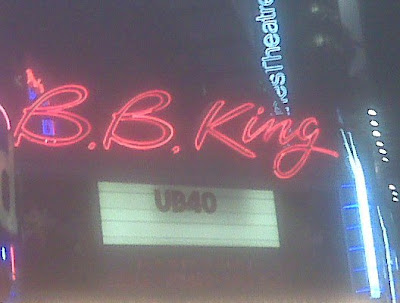 Though it was just a short hop, skip and jump on the subway from my apartment in Manhattan to see UB40 at BB King's in the heart of Times Square, it had been 26 years and few blocks since I had first seen the band during their very first 'Labour Of Love' Tour in 1984 at the Roseland Ballroom on 52nd Street. A lot has changed over that time, but one thing has remained the same -- UB40 still put on a great live show!
I met up with my fellow ska/reggae blogger Steve Shafer (Duff Guide To Ska) at the venue a few minutes before 8 pm and right on cue the band came out on stage and kicked into 'Train Is Coming'. The close to sell-out crowd welcomed them warmly. From there it was a 90 minute trip through the band's extensive catalog with a set list that was definitely crafted for American audiences that included most of the songs the band placed on the U.S. pop charts including 'Red Red Wine', 'Can't Help Falling In Love' and tracks from all four Labour Of Love albums which did quite well here in the States (see the set list the band's sound engineer let me scan below).
New singer Duncan Campbell fills his brother Ali's shoes with ease, and he seemed to get looser and more comfortable as the set went on, really coming to life on the older material. He has a strong, soulful voice and hits all the notes his brother made his vocal trademark. The band's MC/toaster Astro was definitely missed (he was denied a visa by U.S. Homeland Security), but his bandmates filled in for him. It was great to hear album cuts like 'Reggae Music' and 'Baby' where bassist Earl Falconer took over lead vocals and the dancehall sounds of the tunes were a nice change of pace from the band's mostly mid-tempo set. Falconer is an animated performer with a great falsetto voice and it was nice to see him come out from behind his guitar. I also enjoyed hearing 'Dance Until The Morning Light' that the band recorded with Maxi Priest from the 'Twenty Four Seven' album, which had cant miss pop hit written all over it when it was released a few years ago.

True to their word, the set did include 'Tyler', 'King', 'I Think Its Going To Rain' and 'Little By Little' from the 'Signing Off' album in swift succession (see videos below). It was great to hear songs from the album that the band will be playing in its entirety during a U.K. tour which starts later this month. It was the real reason I was most excited to see the band, as that album and 'Present Arms' (the band also performed 'One In Ten') were both huge parts of my musical education. Sadly there were no tracks from the vastly underrated 'Who You Fighting For' album.
Below are videos of 'Tyler', 'I Thing Its Going To Rain', 'Little By Little' and 'King' from 'Signing Off' which I shot on my Flip Video. The visuals may be grainy but the sound quality is very good. Either way you will get a sense of the band live:

Fans in the U.K. should be excited. You are in for a real treat with the 'Signing Off' tour. Enjoy!
Posted by Marco On The Bass at 10:35 AM

Thanks Marco that was great x

We are excited, cannot wait infact.

Chronic from across the Pond