Marco On The Bass Book Review: 'Ska: An Oral History' by Heather Augustyn 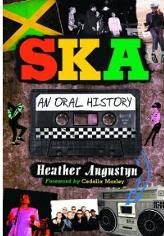 Heather Augustyn opens her new book 'Ska: An Oral History' with a preface that reads: 'Everyone who loves ska has a story to tell - the first time they heard The Specials in the 70's, the first time they danced on stage at a Toasters show in the 80's, the first time they saw The Skatalites perform in the 90's'. No truer words have been written! Its why I started a ska band and why I started writing this blog. Its the stories and experiences - past and present -- that keep ska alive for its fans and for the many musicians who have made it their life work.
So who is Heather Augustyn anyway and why did she write a book about the history of ska? She's quite open about the fact that she is a fan who decided to channel her own love of ska by tracing its historical arc. Taking matters into her own hands she contacted and personally interviwed an array of musicians (including Cedella Marley who provides the forward) who have helped ska to succeed and grow. In ten distinct chapters she traces its post-colonial founding in Jamaica via Derrick Morgan, Millie Small and The Skatalites through Laurel Aitken and Toots Hibbert and later its migration with Jamaican immigrants to the U.K. where it was Anglicized by Judge Dread and later re-interpreted by The Specials, The Beat, The Selecter, Madness and Bad Manners. In the final chapter she chronicles the explosion of ska in the U.S. featuring interviews and profiles of key American ska bands including Angelo Moore of Fishbone, Rob 'Bucket' Hingley of The Toasters, Jayson Nugent of The Slackers and Jim Arhelger of Bim Skala Bim, Buford O'Sullivan of The Scofflaws, Tony Kanal of No Doubt and Dickie Barrett of The Mighty Mighty Bosstones among others.
Its an ambitious undertaking and it took Augustyn nearly a decade from start to publication. In the end she has realized a long held dream that has become a personal mission: to ensure that the stories of 30 key ska musicians who have played a key role in its invention, development and ongoing success are captured and preserved. It is these personal stories and memories that make the book compelling. And it is the personal stories that Augustyn has collected that take this book from what could have been a rote re-telling of ska musical history from other sources into something bigger - fascinating and inspiring memories, anecdotes and stories that are woven together over nearly 50 years that show ska's strength and endurance as the people's music
Highlights that Augustyn has uncovered about the early days of ska include:
Why Byron Lee & the Dragonaires were selected to perform at the 1964 World's Fair in New York instead of The Skatalites.

Derrick Morgan's account of how he wrote the song, 'Tougher Than Tough', when threatened by a real rude boy.

Millie Small talking about her 1964 breakthrough hit 'My Boy Lollipop' which took ska mainstream in the U.S. and U.K.

As a committed 2-Tone disciple I especially enjoyed the separate chapters Augustyn devoted to The Specials, The Beat, The Selecter, Madness and Bad Manners. Highlights for me included:

Dave Wakeling telling the story of why General Public's original video for 'Tenderness' featuring him falling in love with a transvestite bodybuilder was never shown in the U.S.!
Pauline Black explaining the symbolism of The Selecter's logo used on their second album 'Celebrate The Bullet'.
Lee 'Kix' Thompson of Madness recounting how he invented the band's 'Nutty Sound'.
Buster Bloodvessel of Bad Manners explaining how an appearance on Italian Television where he exposed his 'bum' (when the Pope was watching) ended up getting the band banned from the country!
As an historical document, Augustyn's book is worth the high retail price of $35--where else can you find out the real reason that Neville Staple was denied a visa by the U.S. Government for The Specials recent U.S. tour or how Judge Dread helped to launch the career of Bob Marley in the U.K. in the early 70's

Whether you are a hardcore traditional ska fan, have an academic interest in the genre, were raised on 2-Tone or were in the crowd at one of The Toasters shows all those years ago, you'll definitely want this book.

If you are interested in buying the book, it is available for sale on Amazon.com. Click below: