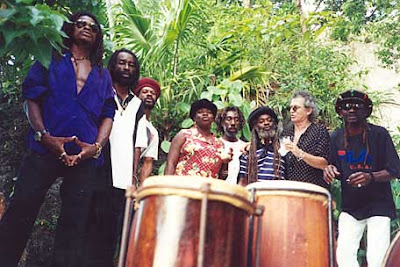 Hot on the heels of the release of The Jolly Boys new album 'Great Expectations', comes 'Wingless Angels II' an album of Rastafarian folk songs, chanting and Nyabinghi drumming featuring the singing of Justin Hinds (of Justin Hinds & The Dominoes fame) and the guitar playing of Keith Richards of The Rolling Stones.

Like The Jolly Boys and their update of Mento, its an album that explores the original sounds of Jamaica and the musical and cultural traditions that had such an important impact on modern reggae. Its the second such album following on an a similarly self-titled first record that Richards released on his own in 1997. Richards' love for all things Jamaican was born when The Stones recorded there starting in the mid-'70s . The band dabbled in reggae, including a version of Jamaican singer Eric Donaldson's 'Cherry Oh Baby' on 1976's 'Black and Blue' album.

The idea for the Wingless Angles project was first hatched by Richards back in 1972. The Stones had escaped to Jamaica after their post-Exile On Main Street U.S. tour to begin work on 'Goats Head Soup' at Byron Lee's Studio in Kingston. Richards later bought a house in Ocho Rios where he met Justin Hinds who had just had a hit with 'Carry Go Bring Come' who was part of a loose collective of Rastafarian drummers and singers. Slowly over time Richards was invited to sit in on some of the musical sessions as a guest listener. Much later he was eventually given the nod to join the circle. It was at this point that he decided the music needed to be recorded. You can read more detailed accounts of Richard's Jamaican experiences and the genesis of Wingless Angels from an article in The Guardian and Spinner.

Richards describes Wingless Angels as making 'marrow music.' He says, “I think everybody knows what they have to do day in and day out, and this music is a way of separating from that, and getting as pure a spirit going as you can. Everybody knows that you’re still living on this earth, and you’re still gonna have to go through whatever you gotta go through, but it’s a release—an uplifting moment where you can actually forget all your sorrows and cares.” This is real soul music and the core of the songs is the sweet singing of Justin Hinds, who had been one of the key figures in the rise of ska music going back to the '50s and remained prominent in the transition to reggae. The new album serves as a loving tribute from Richards to Hinds, who died of lung cancer in 2005 at age 62 (listen to Hinds sing the ska classic 'Carry Go Bring Come' that was later covered by The Selecter).

Below is a video of the song 'Oh What A Joy' from 'Wingless Angels II' featuring the sweet soulful singing of Hinds and the understated guitar playing of Richards:

You can listen to and purchase a copy of Wingless Angels Volume II from Amazon.com: