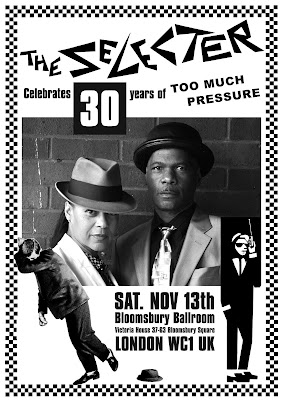 For anyone who loves 2-Tone era ska and reggae, 2010 has been an amazing year to celebrate the music's legacy and longevity. With 1980 as the high point of many iconic releases, 2010 has been a bonanza of 30th anniversaries. With The Specials now actively touring and planning a new release, Madness announcing plans for a new album of material in 2011 and UB40 touring to celebrate the 30th anniversary of the 'Signing Off' album, its now time to turn our attention to the 30th anniversary of one of 2-Tone era ska's all time great albums, namely 'Too Much Pressure' by The Selecter. To celebrate this milestone, Pauline Black's version of the band (featuring her original co-vocalist Arthur 'Gaps' Hendrickson) will perform the album with her new band, in its entirety, exclusively at the Bloomsbury Ballroom in London on Saturday November 13th. 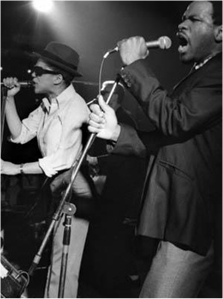 I love the idea of a band performing an album in its entirety and I think its a clever way for a band to market a show or a tour. The Selecter's first album (like UB40's 'Signing Off' and The Beat's 'I Just Can't Stop It') is certainly a worthy collection for this type of showcase. The history of The Selecter is in many ways the history of 2-Tone. The band was a microcosm of many diverse parts of both the 70's white and black music scenes in Coventry, with all the main players in The Specials, The Selecter and various other bands having had some some musical connection with one another. Though the band only burned brightly for two albums worth of material in its original 2-Tone incarnation, their first album remains a classic of the genre (though I remain partial to their second album 'Celebrate The Bullet'.) The show is timely too as ‘Too Much Pressure’ successfully reflected the social and political issues of the early Thatcher years and gave a voice to disaffected youth across the racial divide. Thirty years later the U.K. is confronting some of the single largest budget cuts in its post-war history as overseen by a newly elected Conservative government.
Though the show is meant to be a celebration of The Selecter and their enduring legacy, sadly the band remains divided. Black and Hendrickson's former band mate Neol Davies unveiled his own version of The Selecter earlier this summer. Though the reality of two version of The Selecter is intriguing, its a shame that the members remain unable to patch up their differences and come together to properly honor their legacy. Nevertheless, fans of The Selecter now have the choice to see competing musical visions for the band as laid out by Davies on one side and Pauline Black and Gaps Hendrickson on the other.
Tickets for Black and Hendrickson's version of The Selecter are available at the AGMP Web site. If you end up attending the show, please feel free to share a review, photos or video here on the blog.
Posted by Marco On The Bass at 4:24 PM

Do you think either version of The Selecter would ever do a "Celebrate the Bullet" set?