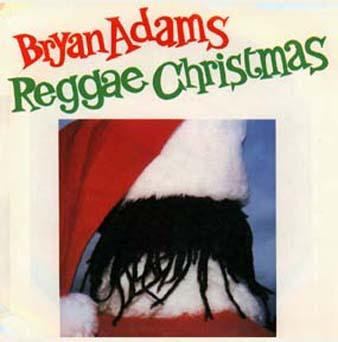 I strive to celebrate and venerate the best of ska and reggae music on this blog. The many artists who made the music a cultural phenomena are all heroes to me and many others. However, as ska and reggae music made its way into the charts of the U.K. (and the U.S, to a lesser extent) and its influence and popularity spread, many mainstream singers, bands and musical artists began including the rhythms and sound in their own songs. Some of these efforts were magnificent and some less so. Others were just plain terrible. I've previously trained the spotlight on some of the more dreadful attempts of what the Brits call 'Cod Reggae' (which is a term I have always loved).

So in the spirit of Christmas, I offer you "Reggae Christmas" a 1984 b-side by Bryan Adams which may be the best (or worst depending on your view) Christmas cod reggae song ever recorded. The video, which gives you a real sense of the early, anything goes days of 80's music, was recorded at the MTV studios in New York City.

What is there to love/hate about this song and video?  Let me count the ways. First, in case anybody was wondering what MTV was like in 1984, “Reggae Christmas” serves as a pretty good time capsule: All 5 original VJ's make caneos as does Pee-Wee Herman (in a Santa hat with dreadlocks).  Why Pee-Wee Herman you ask?  Lest we forget (or if you aren't a child of the 80's). Herman was on hot streak at the time due to his smash hit "Pee-Wee's Playhouse" TV show and "Pee- Wee's Big Adventure" movie.

Musically, you have to hand it to Adams for giving reggae a go. While the song is a rote version of reggae, his band seems to get it musically.  The bass and drums are locked in and the guitars are playing upstrokes in the right place. It was the early 80's after all and from what I have learned, the song gets an airing every year around this time, which I suppose is the goal of every artist who records a Christmas song -- to be remembered, even if for a few minutes. Plus how can you resist these insipid lyrics which read like they were written five minutes before the band recorded the song:


Christmas is nice in Germany
if you like being up to your knees in snow
it's just as cold up in Canada
we gotta find another place to go
So...so we're having a reggae Christmas - down in Jamaica

To those who argue that Bryan Adams is French-Canadian and in no way qualified or capable of attempting reggae, I would point out that his birth certificate does say that he was born in Kingston, albeit the one in Ontario.

A big hat tip to Chuck Wren of Jump Up Records  for alerting me to this fantastically terrible piece of reggae music.

Happy Holidays to all MOTB readers!
Posted by Marco On The Bass at 10:10 AM