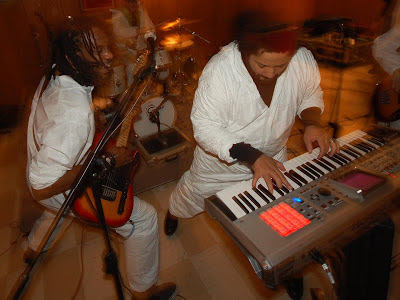 Chris Dowd left Fishbone in 1994, walking off of a tour bus with a broken trombone, a guitar, his keyboard and a suitcase he found on the street in Barcelona. As a founding member of the band hailed by the Trouser Press Record Guide as "one of America's greatest and most overlooked bands," Dowd and his band mates broke out from the early 1980s club scene in Los Angeles with a raucous, high-energy mix of punk, ska, funk and straight rock. However, the growing tension and his departure from Fishbone led Dowd on an intense personal journey. Dowd explained his years away from music and his now timely return.


“I left the band in ’94 and I put out my own record with the band Seedy Arkestra (The Puzzle which featured songwriter David Ryan Harris and the dearly departed Jeff Buckley). I was writing and producing and I was able to get Morley Cain signed to Sony. I toured opening shows for Jerry Cantrell. After that I went back to London and I just focused on songwriting. I came back to LA and honestly, from 2000-2004 I drank myself blind! I was miserable. My marriage was falling apart, Jeff Buckley passed away, Lane Stayley had passed away. I just really needed to find myself during that period.

One of the ways Dowd was able to find himself, was to dive head first into one of his all time loves; cooking! “Kendall and I would have cook offs! We would get everyone together while on tour, send someone to the grocery store with a list, and we would cook for everyone. People could see that I took that shit seriously! I ended up enrolling in Le Cordon Bleu. On the second day of the class my instructor walked in with a Fishbone T-shirt on! HA! I started catering different events…cooking gave me back my confidence. It gave me back my focus and sense of self. With all the touring we did I just lost a sense of who I was and I needed time to get that back. I needed time to be honest with myself."

What I have always admired about Fishbone is the absolute joy they have in playing music and entertaining their fans in ways that reveal their love of music. It is that love of music that keeps the current version of the band featuring Angelo Moore and Norwood Fisher together and it has clearly inspired Dowd to return to playing music again with his new band The Ultrainfidels.

My band Bigger Thomas was very lucky to play support for The Ultrainfidels stop at a show in New Jersey that was part of a short east coast tour they had embarked on with New York punk/funk legends Funkface, to road test the band (that's me and my Bigger Thomas bandmates with Luqman Brown of Funkface and Dowd in the picture below). The show at a Firehouse in Bordentown, New Jersey was more like an underground party for a very large group of friends. Though the attendance was smaller than it should have been, those who were there saw something very special. 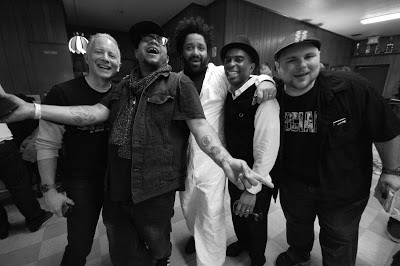 Luckily, I remembered to bring my trusty Flip Video camera to record the proceedings. Based on the front row seat I had, Dowd appears to be a man possessed with the musical spirit again.  The new songs he unveiled were dynamic, diverse (he has dubbed the band's sound as The Specials meets Yes and Metalica), thoughtful, intelligent and incredibly danceable. Even better, Dowd isn't shying away from embracing his Fishbone roots or his love of ska.  One song in particular, "Cubicle" could have come from Fishbone's frenetic first EP originally released in 1985.  It chronicles Dowd's time when he had a straight, 9 to 5 job.  It moves from hyper ska to a Beatles-like psychedelic bridge that reveals Dowd's self awareness. The emotionally soulful "Time Ain't Long" (like many of the best tracks from "Truth & Soul") celebrates life while noting its impermanence and the difficult but essential lessons it offers us as we travel from youth to middle age. Plus Dowd rips off an amazingly bluesy harmonica solo.

My Bigger Thomas band mates and I were joined by Dowd for a raucous version of The Specials cover version of Toots & The Maytals classic "Monkey Man." Dowd then invited our singer Roger Apollon to join him for a joyful and faithful take on The Pioneers skinhead reggae classic "Longshot Kick The Bucket."

Dowd is coming back with open eyes about the music landscape and his place in it. He understands that they way music is marketed has changed and he smartly sold cards for fans to redeem his new 6 song EP digitally stating, "When we put this new music out if it reaches five million people that would be great! But if it only reaches five people, that’s OK too. If it goes double platinum, great but I will be OK if it only goes double plywood!"

Dowd clearly understands that The Ultrainfidels are his chance to reclaim his Fishbone legacy and that he has an opportunity to reach fans of the band who have missed him and his important contributions to the band and their history.  Based on the live show I saw, it will only be a matter of time before The Ultrainfidels are no longer playing small clubs and Firehouses.  And while that is a good thing for them, try and catch the band in an intimate setting while you can so you relive the spirit and love for music that we all love about Fishbone.

Credit and thanks to the iconic punk rock photographer Ken Salerno for the amazing show photos.
Posted by Marco On The Bass at 9:57 PM

Wish I could have been there!