In Memory Of Joe Strummer 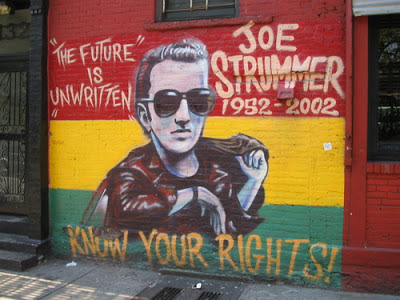 It is hard to believe that the world has been without Joe Strummer for a decade. The co-founder and lead singer of The Clash died Dec. 22, 2002, of an undiagnosed heart defect at just 50 years old. Yet even his most topical songs continue to resonate.  According to an excellent piece done about Strummer's passing on NPR this week:


The band's biggest single, "Rock the Casbah," released in 1982, could as easily have been about last week's news from Syria. A Middle Eastern sherif, or king, orders his air force to bomb his own subjects, who are rebelling. Like the best Clash songs, it manages to be a pop tune and a protest song at the same time.


Strummer remains a musical hero and an ongoing inspiration to me -- listen to his diatribe before kicking into a raucous version of "Rock The Casbah" at the US Festival in 1982.  It was 2-Tone, The Clash and reggae music that offered me a lifeline during a difficult time in my life in the early 1980's. Instead of alcohol and drugs, I found refuge in music that changed my life in incalculable ways.  I am the man I am today because of people like Joe Strummer who offered me a vision that the world could be different and that I could play a part in changing it. The Clash's albums were like a classroom for me and their admonitions to question authority, support social justice and know my rights, helped shape the political and world view that I still hold to dearly nearly 30 years later.

More importantly, The Clash and other punk bands inspired me to pick up a guitar and find other like minded souls to make music with. I had no idea how to play the bass when I started, but I was encouraged by Strummer and others who said that it didn't matter as long as kept at it and was passionate about it.


“Nothing in the world can take the place of persistence. Talent will not. There is nothing more common then unsuccessful men with talent. Genius will not. Unrewarded genius is almost a proverb. Education will not. The world if full of educated derelicts. Persistence and determination alone are omnipotent.”
― Joe Strummer

Even better, Strummer imbued me with the punk rock ethos that everyone had a story a tell and that those stories were important and interesting.  For that I am deeply indebted.

In memory of the tenth anniversary of Joe Strummer's passing check out this mind-blowing live video of their cover of Willie William's "Armagideon Time" (which segues into the dub "Justice Tonight") at the Hammersmith Odeon in 1979.  This version still gives me musical chills each time I hear it.