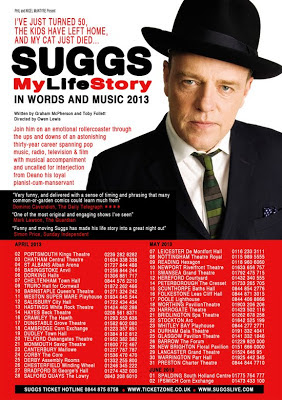 Madness singer Suggs is ditching his baggy trousers to embark on a solo theatrical one-man show, "Suggs: My Life Story", across the U.K. during the Spring 2013, in which he will relate his life story with anecdotes, jokes and music.

Suggs was an only child, raised by his mother, a jazz singer and barmaid, who took him around the Soho and East End clubs where she worked. His father, William McPherson, left before he was born, and was never seen by the family again. Suggs later learnt that his father was a heroin addict, who died in 1975, just when Madness was being formed.

According to an interview Suggs did about topics that he touches on during his one man show, Madness have always served as a surrogate family for the boy who never knew his father and had an unconvetional upbringing.


“The story of Madness, of course, is that most of the band were from dysfunctional families. We were a sort of group of loners. When I hear talk of kids from one-parent families ending up in gangs, because the gang is a family, I understand. Obviously the great thing was we all had something to do in our gang, as well as hanging about on street corners nicking bicycles. ’Cause we formed a band.”

If you live in the U.K., click here for a chance to win free tickets to the show of your choice. Sadly, there is little chance that Suggs will bring his show Stateside, though hopefully some of these shows will be recorded for future release on video or DVD.
Posted by Marco On The Bass at 1:58 PM