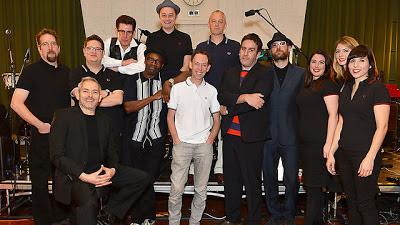 After announcing plans to play a 10 date UK tour this coming May, The Specials celebrated the news by taking over the iconic Maida Vale studios of the BBC yesterday for a blistering live, "Classic Album of the Day" show hosted by BBC 6 DJ Steve Lamacq. The band performed a nearly hour long set featuring cuts from both of their albums, "The Specials" and "More Specials" in front of a raucous live audience. Have a listen and play it loud!

Singer Neville Staple was notably missing from the performance.  It has been reported that he was feeling sick and stayed at home to recover.  He is expected to re-join the band during their UK tour.
Posted by Marco On The Bass at 3:04 PM

he announced today he will not be joining the band on the forthcoming tour...