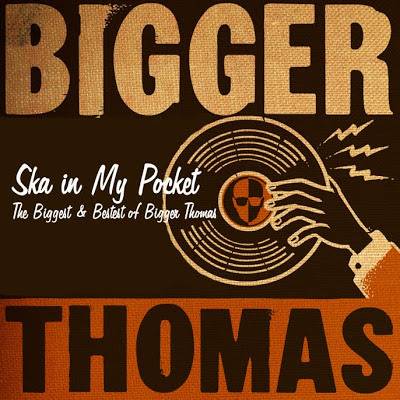 The advent of 2013 marks the 25th anniversary of my band Bigger Thomas!  And to mark the occasion, we have released "Ska In My Pocket: The Biggest & Bestest of Bigger Thomas" a digital only release featuring twenty one of our favorite songs taken from the four albums and two demo tapes we have recorded since forming in New Brunswick, NJ in 1988.  We feel it is a fitting way to honor our musical legacy and use it as a springboard for an EP of new music we plan to release later this year. Click here to download the album. You can stream the album below:

This compilation tells a story that began a quarter century ago when the original members of the band (Roger Apollon, Marc Wasserman, Jim Cooper, Steve Meicke, Sean Moore, Kevin Shields and Steve Parker) first met one another and has continued through to today's band which still includes three of the original members (Apollon, Wasserman and Cooper) with long time members John DiBianco, Spencer Katzman, Rob George, Chris Malone and Roy Radics. Though a love for ska and reggae music originally brought us together, each member has brought a diverse set of musical interests that we developed into our own sound with 2-Tone ska (The Specials, The Beat, The Selecter), UK reggae (Steel Pulse, UB40) and punk (The Clash, The Jam, The Police) as the foundation. Like our cherished musical influences, our goal has always been to write and perform music that gets people dancing and thinking too.

Each member of Bigger Thomas has contributed individually and collectively to these unique hybrids of ska, reggae, pop, calypso and soul that appeared on four albums -- Bigger Thomas (1989), Resisting Success (2004), We Wear The Mask (2005) and Steal My Sound (2010) as well as two demo tapes we recorded in 1988. These 21 songs reflect the best of the diversity, creativity and originality we have developed writing and performing together all these many years. Most importantly these songs are a testament to the brotherhood we have built and that has endured through the ups and downs that our shared musical life has thrown at us over the last twenty five years. We hope you enjoy listening to them as much as we have enjoyed playing them.

Many thanks to Scott Benson and Steve Shafer (Duff Guide To Ska) for the combined effort on the art work.