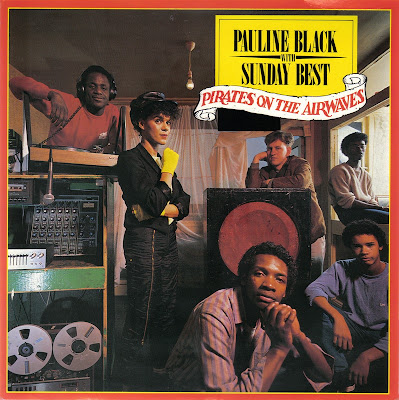 I remember spying a small article in the NME back in the summer of 1984 that mentioned a new project called Pauline Black with Sunday Best was about to release their first single.  The song, "Pirates On The Airwaves" heralded pirate radio stations like Radio Caroline and others that broadcast music illegally from ships moored in international waters outside the U.K. I searched high and low for the song with out any success for many years only finding a copy online about five years ago.

In addition to Black on lead vocals, the band included 2-Tone refugees Neville Staple and Lynval Golding of The Specials who had just left the Fun Boy Three.  The band was rounded out by a teen aged Wayne Lothian on bass (who later played with Special Beat, General Public and Dave Wakeling's version of The English Beat here in the U.S.), Phil Graham on drums and a young guitarist/keyboardist named Jeremy Edwards who helped write the song.

I was reminded about this rare song by sad news earlier this week when Black posted about the untimely passing of Edwards on her Facebook page:


Very sorry to hear of the passing of Jez Edwards. I shall forever remember him as the fresh faced young teenager who played keyboards on a single 'Pirates On the Airwaves' that I did with Lynval Golding & Neville Staples as the short- lived band Sunday Best. My condolences to his family and friends. Pauline.

"Pirates on the Airwaves" is a fun, lighthearted and bouncy funk song coated in an 80s pop sheen.  The song has never appeared on any record, CD or compilation, making it an early 80's musical curiosity for fans of 2-Tone. Below is a short clip of the band making a very rare UK TV appearance. Edwards is playing guitar along with Golding.