Next Electric Avenue Show: The Scofflaws and The Bullbuckers on Saturday, January 19, 2013 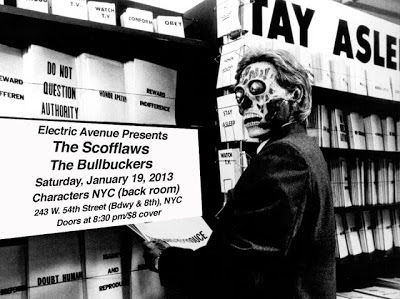 The first Electric Avenue show of the year will kick off on Saturday, January 19, 2013 with the long awaited return of 90's NYC ska heroes The Scofflaws and the NYC debut of Wilmington, Delaware-based 10 piece ska and soul band The Bullbuckers! Doors are at 8:30 pm and the cover is a reasonable $8.

The Scofflaws are a Huntington, Long Island, New York-based third wave ska band that debuted in 1988. Known for their rambunctious live shows, technically proficient horn solos and tight arrangements, the band were one of the top third wave ska acts of the '90s and one of the most beloved bands on the now-defunct Moon Ska label, as well as the epicenter and focal point of the once-thriving Long Island ska scene.

The Bullbuckers penmanship, and accents are from the States but the music's heartbeat at it's source starts in Jamaica's roots including elements of mento, ska, rocksteady, reggae, and dub mixed with soul, jazz, latin, a splash of rock, and hip-hop.

Electric Avenue is a partnership between myself and my fellow New York City-based ska blogging friend Steve Shafer (AKA Duff Guide To Ska). We have teamed up to present monthly ska and reggae shows at Characters NYC, a midtown Manhattan Irish pub (243 West 54th Street, between Broadway and 8th Avenue in Manhattan) with a big back room ideally suited for live music.

Since last fall, we've been undertaking this labor of love--doing it for free (the bands split 100% of the cover, nobody else takes a cut)--to support ska bands and their fans, and have some fun in the process. Electric Avenue shows already have featured some of the best acts on the ska scene, including King Django, The Snails, The Frightnrs, Destroy Babylon, Bigger Thomas, Beat Brigade, Doomsday!, Los Skarronerros, and The Pandemics. The Facebook Electric Avenue event page can be found here. And take a moment to "like" the Electric Avenue FB page, so you keep up on our shows.

In between sets, Steve will be selecting a great mix of trad and modern ska--with a helping hand from Kames Jelly on the decks. To get you in the mood, here are a few videos of each band: