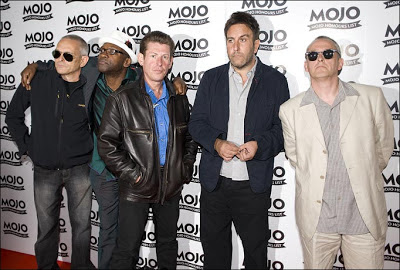 The Specials are finally returning to tour the U.S! The band announced today that they will perform two dates at the South By Southwest festival in Austin, Texas this coming March as part of the first leg of a larger North American tour that will also include Vancouver, B.C. The band will be without co-vocalist Neville Staple, who announced he was leaving the band a few weeks ago.

According to an announcement made on the band's website today:


The Specials will start the first leg of their 2013 USA tour in March. Starting in Chicago the tour will route through Austin, Texas with two confirmed dates at the huge South by South West Festival of Music and Film on March 13th and 15th. Followed by shows on the West Coast. Dates and Venues will be posted soon on this website.

The Specials also addressed the departure of Staple on their website, stating:


We are very sad Neville cannot join us on The Specials UK tour in May 2013 or indeed on the future projects we have planned. He has made a huge contribution to the fantastic time and reception we have received since we started and reformed in 2009. However, he missed a number of key shows last year due to ill health & his health is obviously much more important. We wish him the very best for the future.

This is great news for fans of the band who did not have a chance to see the band on their most recent visit to North American in 2010 (when they played a handful of shows in Toronto, Los Angles and New York) and in 2011 when they made a few TV appearances. I selfishly hope that they will include one more stop in New York before they head back across the pond for good!
Posted by Marco On The Bass at 4:23 PM

Marco, I too am ska officianado and am really stoked their planning to come to the House of Blues San Digo in March!! I saw that Neville is unable to make the tour due to health reasons. Is it safe to assume that Terry will not be there either? I've been a fan since the early days (I'm turning 45 this year) and have never seen them play live...I'm not sure it will be worth the $30.00 (I'm surviving on an extremely limited budget) if neither Terry nor Neville will be there...

Hi Larry! Thanks for your comment! While Neville will not be touring with the band, the other 5 band members are together including Terry, Brad, Lynval, Horace and Roddy. I suggest you buy a ticket if you can since I highly doubt you will get a chance to see them play live again. Enjoy!