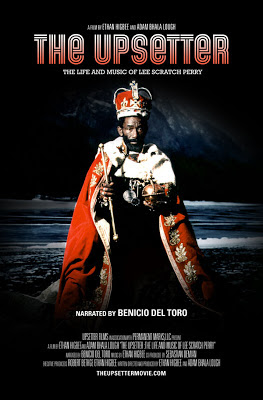 The announcement that Lee "Scratch" Perry is performing on Friday April 12th and Friday April 19th at the 2013 Coachella Music Festival and touring with The Selecter on a few dates on the West Coast means that there will also be screenings of the 2011 acclaimed documentary, "The Upsetter: The Life & Music of Lee Scratch Perry" in Southern California during April.  Produced and directed by Ethan Higbee and Adam Bhala Lough and narrated by Academy Award Winner Benicio Del Toro, the documentary is a feature length film about one of the most fascinating and influential artists of our times.

The film begins in rural Jamaica, probing Perry's youth as well as the events of his peak musical production years in Kingston, in which he mentored a young Bob Marley, created the sound of Reggae as we now know it today, pioneered a new genre of music he called Dub, invented what was to become the remix and produced international hit songs for artists from Junior Murvin to The Congos to Paul McCartney to The Clash.  He did all of this while working out of the infamous Black Ark Studio, a shack that he built with his hands that he later burned to the ground in a fit of rage.

Equally a documentation of a musical culture and a fascinating character study of genius and madness, the film is a sight and sound clash of visual and aural styles, utilizing some fantastic stock footage, photographs, concert video, audio clips, music video clips, and an exclusive, candid interview with Perry at his home in Switzerland. Filmed in Jamaica, London, Switzerland, New York, San Francisco, Los Angeles and Colorado, the film charts Perry's influence on music.

If you can't make it to Coachella or to any of the shows Perry is playing with The Selecter during their just announced U.S. tour, then consider renting and streaming the entire documentary below for the super low price of just $4.99.  A French language version is also available.