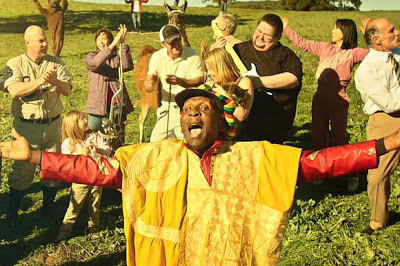 In case you missed it (and I did!) below, are Volkswagen television ads staring reggae legend Jimmy Cliff singing a cover version of the Partridge Family theme song “Get Happy” that were produced to air during the  National Football League's Super Bowl last night.

The first ad, featured Cliff sourrounded by various YouTube celebrities known for their decidedly unhappy online tirades or breakdowns. The large group dances -- awkwardly at times -- while Cliff extols the virtues of being happy. Look closely and you'll see YouTube celebs like Angry Politician, Girl Who Loves Cats So Much She Cries and Base-Throwing Angry Baseball Manager.

The other ad, which aired during the broadcast of the Super Bowl game last night featured an American office worker speaking with a Jamaican accent, urging co-workers to be a bit more positive. The spot is backed by Cliff crooning the same "Get Happy" cover.  Reaction to the ad has been mixed with some including NBC’s “Today Show” calling it offensive.

Cliff responded to the controversy with the following statement on his Facebook page:


“I chose to record the song that’s part of the Volkswagen Super Bowl campaign because it has a great message and it is something that people can apply to everyday life. I have travelled around the world many times, met all types of people and played in front of millions throughout my career. I have personally seen the positive effects of reggae music and Jamaican culture. I am a proud Jamaican and stand by this campaign, I feel like people need to focus on peace and unity. Blessed love.”

Apparently the Jamaican government was also supportive of the spot.


“I think this is a very creative commercial which truly taps into the tremendous appeal that brand Jamaica and its hospitable people have globally,” Tourism Minister Wykeham McNeill has said in a statement.

Volkswagen has stood by the commercial. Since it was posted to YouTube on Jan. 27, the commercial has been viewed more than 7 million times.
Posted by Marco On The Bass at 3:08 PM

Hmmm, reggae as "happy music" again, oh well... And Volkswagon!? Seriously? That'll go down well with the Rasta bredren, Haile Selassi I was last seen being bundled, at gun point, into the back of a VW beetle before being murdered by Mengistu's junta. Peace.