Finley the singing dog croons along to UB40 hits 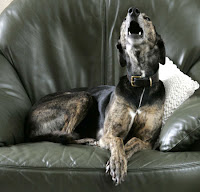 Sorry but I had to post this even though it falls into the category of annoying videos that people post about their kids and pets doing stupid things. In the "is this really news" comes a story from The Telegraph in the UK about Finley, a singing dog who lives in a bed and breakfast. His tastes are unexpectedly specific - he refuses to sing along to anything other than the hits of UB40.

According to his owners it's only UB40 songs. They have hundreds of CDs which they play all the time, but when they put anything else on Finley just sits there in silence. "Then as soon as we put UB40 on his little tail will start wagging and banging on the floor, and then he'll just throw his head back and start yowling along. He just started singing along in his own style a couple of years ago - we couldn't believe it, especially when some of it was in tune. We were both really shocked because he's normally quite a quiet dog, it was so out of character. I think he even shocked himself slightly."

You can read the article here which includes the video of Finley howling along to "King".
Posted by Marco On The Bass at 6:28 PM