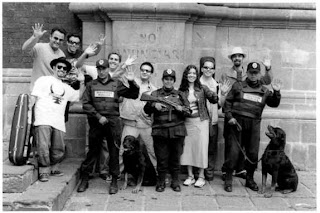 There is a book that was published in 1987 called Cut & Mix (I'll post more on this at a later date). In it, author Dick Hebdige charts the trans-Atlantic/cross-cultural Caribbean/UK exchange that sparked the 2-Tone ska revival. If Hebdige were to update his book to cover the last 20+ years of ska around the world, he’d be obliged to add at least one chapter on ska in the Latin world and Mexico in particular, and Los de Abajo (LDA) would be at the center of that chapter.

Like the best of the 2 Tone bands, most importantly The Specials, Mexico City’s LDA are artists with deep convictions who embed lyrics with political power inside the most disarmingly danceable tunes which combine ska, hip-hop and Mexican folk music. As one of the leaders of the Latin ska movement, their latest album "LDA v. The Lunatics" is a must listen. The "lunatics" in question are both the forces they rage against, and the collaborators who rage with them – most notably, ex-Specials/Fun Boy Three member Neville Staples.

LDA are The Underdogs (Spanish for ‘Those from Below’), whose fiery Mexican protest songs and superb musicianship have won them a huge world following during the past few years. The eight-person band, who formed in 1992 and take their name from a classic novel about the Mexican Revolution, fervently believe that change comes from below and are open supporters of the Zapatista movement in Mexico. "Los De Abajo V The Lunatics" is the third official album from the band and, as with their two previous efforts, the lyrics not only condemn their country’s corrupt officials but also call on honest politicians to tackle poverty and give free expression to everyone.
LDA have long regarded Madness and the Specials as key influences, and the band provides not only an excellent cover version in Spanish of 'The Lunatics (Have Taken Over The Asylum') by Fun Boy Three, but also an English language bonus track featuring Neville Staples. As many know, the song is about the idiots in government leading society astray, and this sits quite comfortably with LDA’s own message regarding Mexico. There are no bad tracks on this album and even if you are a bit unsure at first, give it a few listens. Highlights are Track 1 ‘Resistencia’ (a wistful effort featuring words by Zapatista Insurgent Commander Esther); Track 2 ‘Los Lunaticos’ – the Spanish version of Fun Boy Three’s hit which I think may edge the original, and Track 6 ‘De Marcha’ – a rocking ska tune.

The band was on a tour of the UK in July. The Independent reviewed LDA's live show which you can read about here. 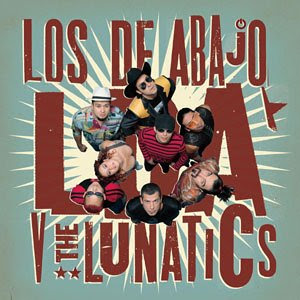 Hello! Thanks for all 2tone music. From the past and the future! :)
Do you know "Los intocables? Not "the untouchables"


It is a band of the ska in the mid-80. Son of Argentina.
The aesthetic is similar to "the specials" But his music can be heard several influences.
Here a video:

I have two discs (then separated and now met again to release a record with success and new items) If you want to share just say so.
Thank you!

Other band, from argentina:
http://www.youtube.com/watch?v=jcHxuYLF9Ck&feature=related