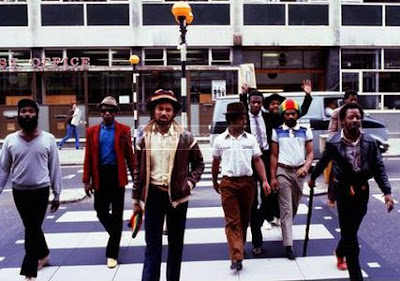 Matumbi was formed in London in 1970 and from the very beginning they embodied the essence of the emerging UK reggae scene. The man behind Matumbi was Dennis Bovell who, in his many projects, established British reggae as a viable force independent from its Jamaican cousin. Recording in various lineups as Matumbi, African Brothers or African Stone as well as backing many successful solo acts - from Janet Key and Susan Cadogan to Linton Kwesi Johnson and Lee Perry - Bovell contributed to the invention of many reggae subcategories, such as "lovers rock" and "dub poetry."

Matumbi's strongest side, however, was a smooth blend of righteous roots reggae with pop and, more importantly, newly introduced New Wave of the late seventies. Punks and Rastas mingled freely at the time and did some amazing "crossovers" even before the term was coined. You can hear echoes of these exciting times in the music of Matumbi and, despite their preferred format being roots reggae, it is one of the key elements that distinguished British reggae act from its Jamaican counterparts.

No matter how important they were in establishing the scene, Matumbi never had the success of UB40, Aswad, Steel Pulse or Maxi Priest who followed in their foot steps. And Matumbi are not alone: Black Slate, Misty in Roots, Black Roots are only some of the acts who produced high quality output around same time, but never received recognition. The reissue of the "Empire Road" LP corrects some of that injustice. It covers all of their great singles and important album tracks from 1978-1981, plus some rare 12" versions.
Here is a video of the band performing "Empire Road" live:

Here is a video of the band performing "Rock" in the studio:

Here is a UK TV program from 1976 on the British reggae scene including interviews with members of Matumbi:

Here is the track listing for Empire Road:

Matumbi - Empire Road
Posted by Marco On The Bass at 7:53 PM

I understand you putting up downloads of live shows, demos, and such. I'll even give you leeway on some of the out of print stuff. But "Empire Road" is still in print (or at least still widely available)! EMI just re-re-released in in 2005. (After the 2001 re-release). It took me about 30 seconds to find new copies for sale at places like Amazon and CD Universe. I imagine Dennis Bovell and his band mates would take issue with you putting his music up for free download.

Thanks for the comment. I get very few of them. Thanks also for being a regular reader. I guess we will need to agree to disagree on the topic of posting music on blogs.

So... I read the article. Very short and not very sensical in this case. Matumbi/Capital Letters/et. al. should welcome the piracy of their music so that they can broaden their fan base and sell more tickets to their live concerts? Which means, that since they're functioning bands anymore, they're shit out of luck. They shouldn't earn any money from their old work anymore (unless the reunite, which may be why you're pushing this Specials reunion stuff so much).
Of course, that also means that labels will no longer have any reason to record new music or release old music, since they don't get a cut of any live shows.

Clearly this is already impacting Reggae. Greensleeves went broke and had to sell themselves to the only competitor that was left, VP (Jet Star went broke and disappeared a year earlier). And what is going to happen if the Chin family hits a bad streak? They can't look to Blood & Fire to bail them out with money for reissues, B&F went under last year too. Maybe the Dodd's will help them out? Well, they're losing out too. And God forbid any Lester or Lloyd stop being able to play live. There goes all their money. Hopefully they invested all their earnings wisely. But hey, who cares. Free music! I have a right to this stuff! It's my god given right to have all of this stuff, right?

The biggest, and ultimately most important, distinction between the cases that article cited (Radiohead) and what you do, is the power of the decision to do it.

If Dennis Bovell were to post this stuff on his website, more power to him, I think that it is a valid approach to releasing music in this era. Artists can and should exploit new technologies to their benefit. The power to decide what their strategy is though, that's the key. You shouldn't have that power over their creations.

Thanks for sharing your opinion.

what's up marco, I agree with you.
I rarely buy music, but I am a major supporter in other ways. thanks for the download!