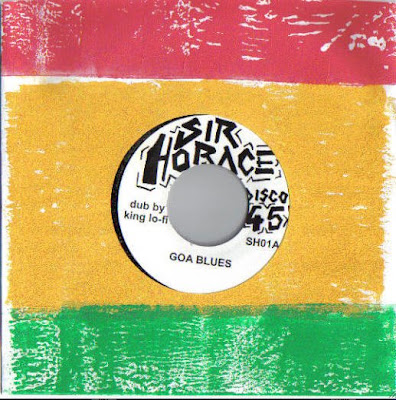 As bass player of The Specials Sir Horace Gentleman aka Horace Panter provided the backbone for one of the most iconic British sounds...The Specials & 2 Tone. Post-Specials Horace went onto play for The Pretenders (for a day), General Public, Ranking Roger, but it's only now that he releases his first ever solo material. The single feature Fuzz Townshend (PWEI, Bentley Rhythm Ace, Pama Intl) on drums, who Horace played with in General Public and Ranking Roger's band, his son Lawrence on keyboards and a host of friends from Coventry.
Side A- Goa Blues
Side B- Depleted Uranium Dub

The single is only available now from Rockers Revolt and from what I understand almost half of the 300 that were printed have been sold. Move quickly if you want one.
Sir Horace 7" Vinyl
Posted by Marco On The Bass at 9:56 AM